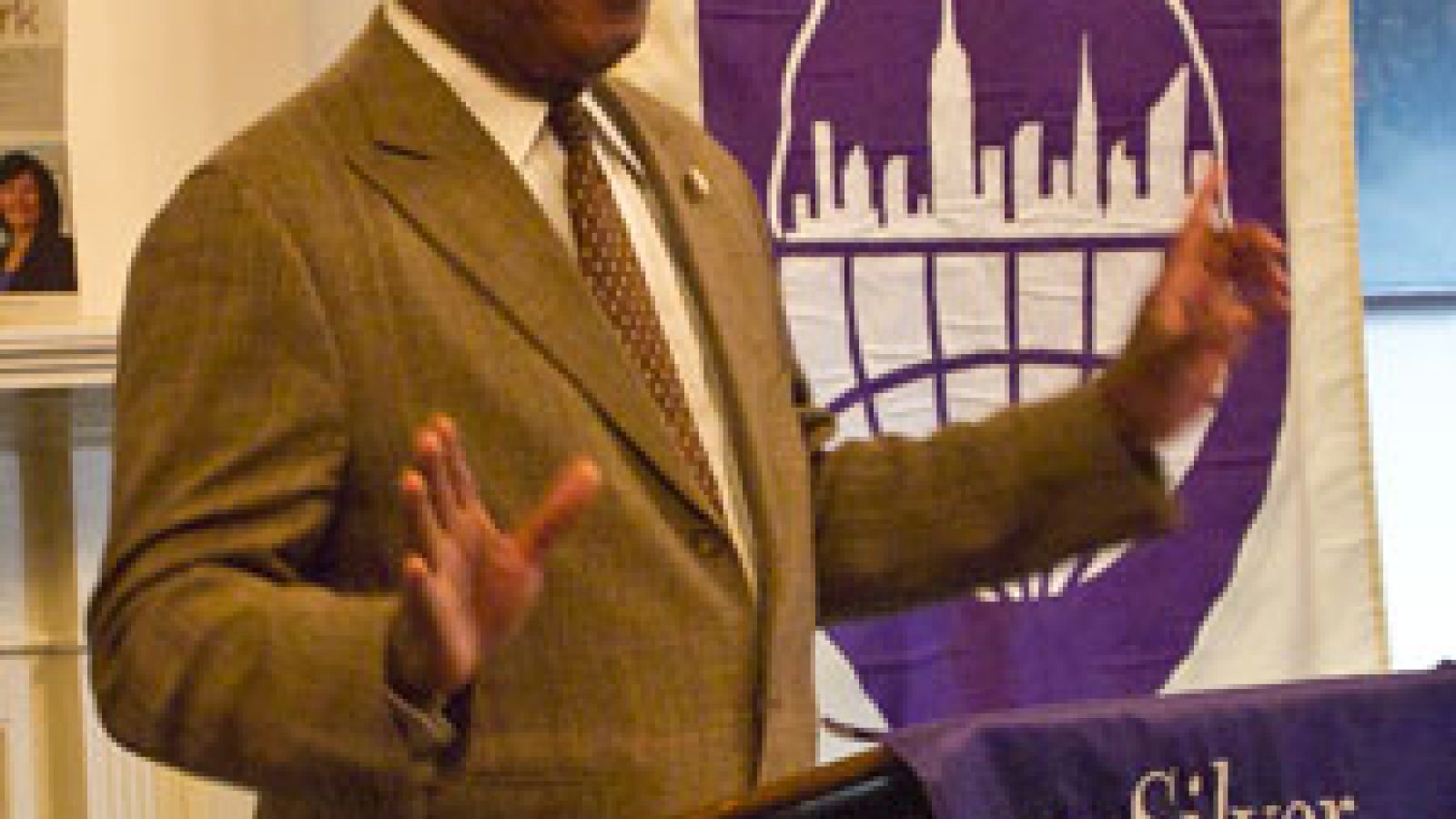 Howard Dodson, director of the Schomburg Center for Research in Black Culture at the New York City Public Library, spoke to students, faculty, and staff at the NYU Silver School of Social Work earlier this month about the legacy of Martin Luther King Jr. The February 8 lecture, "Injustice Anywhere is a Threat to Justice Everywhere," was part of the School's celebration of Martin Luther King Week and Black History Month.

"Many people who are leaders are as much made by the movement as they make the movement," said Dodson. This was the case with King, who Dodson noted aspired to be a Baptist minister and had "no intention" of becoming a civil rights leader. King was picked as one of the movement's leaders during the Montgomery bus boycott because he was new on the scene with no "political baggage."

Retrospectively, Dodson asserted that the Martin Luther King Jr. at the time of his 1968 death was radically different in his thinking than the King who gave the "I Have a Dream" speech in 1963. This was partly because of his deep involvement in the events within and surrounding the movement, which, according to Dodson, included his relationships with civil rights activists like Malcolm X and Stokely Carmichael.

Dodson explained that the title of his talk is a quote from a 1963 letter written by King. Critics argued that King should limit his public statements to civil rights--seen as a legitimate area of commentary for a Baptist minister--but that he did not have the right to speak out against the Vietnam War. King challenged this notion, taking the stance that everyone has a moral and ethical responsibility to speak out against any social injustice.

While King's work started with the African American civil rights movement, he evolved to ultimately be committed to a global view and concern for all of humanity, which earned him the Nobel Peace Prize. By 1968 he pursued economic justice as a basic right of all Americans and was interested in eradicating poverty across the globe.

Tying King's work to the present day, Dodson commented on the increasing income gaps between Americans and growing defense expenditures. At the same time, there has been virtually no discussion of the plight of the poor from the Obama administration. He noted that when choices are made for establishing priorities during a time of war, the poor are often the lowest concern.

Dodson began the lecture on a personal note. He remarked that his professional work has been rooted in the morals and ethics espoused by King, with the foundation of his career being a dedication to service. After working for the Peace Corps in Equator, and later in Washington, DC, Dodson experienced a profound sense of disillusionment as a result of the assassinations of King and Bobby Kennedy. King's death was the primary incentive that led Dodson to study African American history.

"Despite the fact that so many people join in annual Martin Luther King celebrations, we are not benefiting fully from the opportunities we have each year to build a better world and future," asserted Dodson. He argued that people are more inclined to focus on the idealized King as reflected in the "I have a Dream" speech than the politically evolved King of 1968. He suggested that if we focused more on the 1968 King, there would be better insights that help the nation root out today's injustices.

Dodson fielded questions and commentary for a lively exchange with the audience on contemporary social justice concerns and the accomplishments, disappointments, and challenges of the Obama administration. He also shared information about the Schomburg Center, which has over 10 million holdings, including a rare recording of a speech by Marcus Garvey; documents signed by Toussaint L'Ouverture; and a signed, first edition of a book of poems by Phillis Wheatley. The Center recently acquired the papers of Dr. Maya Angelou.