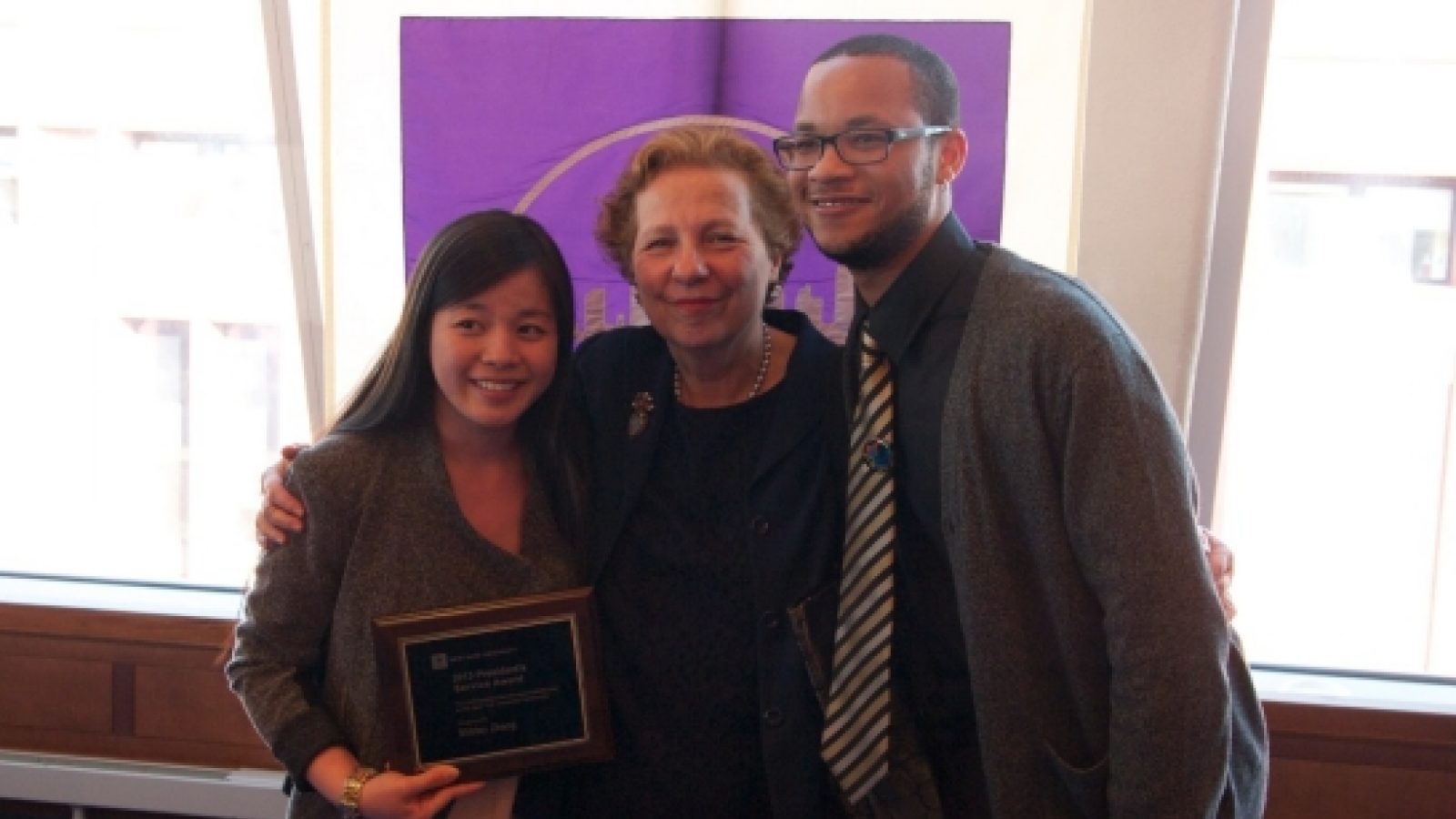 New York University honored student leaders and organizations for their outstanding service to the NYU community on April 17 during the 29th Annual President’s Service Awards Ceremony. Students and organizations—including five NYU Silver students and one student organization—were recognized for their significant and positive contributions to the University, including building community, demonstrating civic responsibility, promoting diversity, enhancing wellness, and creating new and projects and activities.

For many students at the NYU Silver School of Social Work, a commitment to others is often what drives them to become social workers. Beth Diesch, MSW ’13; Darrin Oliver, BS ’13; Roopa Raman, MSW ’13; Lily Tagg, BS ’13; Shirley Zhang, BS ’13; and students in NYU Silver’s Undergraduate Student Government Association have demonstrated a passion for helping fellow students and members of the NYU community.

Tagg is the recipient of the award for her leadership in mentoring new students and for social justice programming at the Silver School. Tagg is co-president of the Undergraduate Student Government Association (USGA), and interns at the King’s County District Attorney’s Office in the Victim Services Unit. The USGA also received an award for its support of freshman and social justice initiatives.

“Building a diverse and socially just community at NYU Silver is close to my heart, and I thank all who have helped us work towards this goal!” said Tagg.

Undergraduate student Zhang was recognized for her dedication to multiple student groups. She has served as a CommUnity group advisor, commuter assistant, Alternative Breaks site leader, and resident assistant and is also a community service organizer. In addition to these roles, she is a member of the Chinese-American Planning Council. On her commitment to the School, she noted, “I don't see the things I do as extraordinary because I'm just doing things that feel right to me. I'm very grateful for the people in my life who have been a constant source of support and inspiration.”

Darrin Oliver, also in the bachelor’s program, is vice-president of the NYU student Gentlemen of Quality student group at NYU. Gentlemen of Quality is dedicated to the principles of leadership, service, and scholarship, and has given back to the community in several ways. Explained Oliver, “Based on our monthly community service events, weekly mentorships, and social fundraising events, we received the President's Service Award. Our mentorship is located at Marte Valle High School in the Lower East Side, where we run an after-school program.”

Graduate students Raman and Diesch received the award for their leadership efforts to assist members of the New York City community in the wake of Hurricane Sandy. Raman interns at Bronx Community College Psychological Services and also recently received the Miriam Dinerman PACE Scholarship from the NASW-NYC chapter. “It was really a privilege to have received this amazing and prestigious award for my service work during the aftermath of Hurricane Sandy, and to have been able to work alongside many others in my endeavors,” she said. “As one of the speakers stated at the award ceremony, I believe that we were awarded for the work that we do on a day-to-day basis, and that is so much a part of lives and our make-up.”

Diesch, who is president of the Phi Alpha Honor Society and interns at the New York Asian Women’s Center, said of receiving the award, “I feel very honored to be receiving the President's Service Award this school year, but even more than honored I feel humbled to have stood with so many amazing peers and organizations at NYU. I was nominated for the award for my ongoing work with Sandy relief efforts, and I have been so thankful for the people I have been able to work with and the community strength I have witnessed.”

NYU Silver congratulates these students on their achievements and for upholding the values of the social work profession!