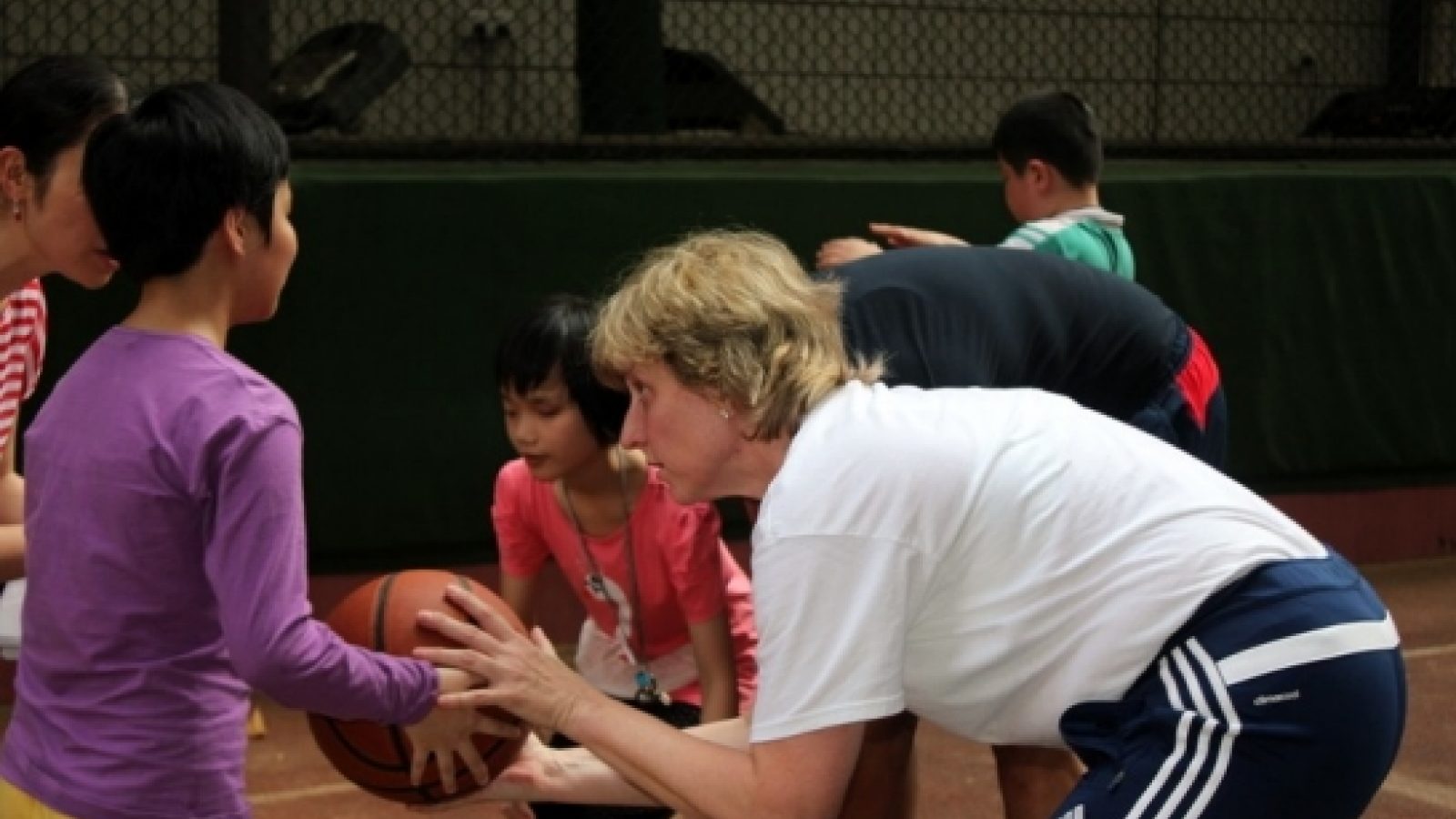 Becky Clark, MSW ’87, traveled to Guangzhou, China, in May as part of the US Department of State’s first sports envoy program to advance disability rights. Clark, a Deaflympian and New York-based licensed clinical social worker/psychotherapist and sports performance consultant, and Paralympian Andrea Woodson-Smith were in Guangzhou from May 15-20 to promote inclusion and equality for persons with disabilities, especially young women and girls.

“We sought to foster a network among participants for collaboration on disability issues using sports as a tool for social change,” explained Clark.

Clark co-chairs the WomenSport International Task Force on Deaf and Hard of Hearing Girls and Women in Sport. She played basketball for the University of Tennessee, is an accomplished softball player and marathoner, and is a three-time Deaflympian who won one gold and two silver medals in volleyball. She was a torchbearer for the 2002 Winter Olympics Torch Relay Team. She holds a PhD in kinesiology with a specialty in sport psychology from Temple University.

Woodson-Smith is an assistant professor at North Carolina Central University and former US national women’s wheelchair basketball team member. She played professionally with the Dallas Lady Mavericks and the Charlotte Rollin’ Bobcats.

One of Clark’s most memorable experiences in China comes from a sports clinic at a school for the blind, where she and Woodson-Smith taught two young, blind girls to dribble a basketball for the first time. With the help of a Chinese interpreter, Clark and Woodson-Smith instructed the girls to learn the feel of the ball in their hands and then coordinate it with the sound of the ball as they dribbled it up and down while standing in one place.

“Their smiles and laughter exuded such joy that moved us to tears and left an indelible imprint upon our hearts,” she recalled. “I can say neither one of us will ever forget those girls nor the experience.”

Similar experiences, where Clark and Woodson-Smith engaged through sports with young Chinese girls with disabilities were particularly meaningful. Clark witnessed increased self-confidence, self-esteem, and joy in girls who had been standing alone or isolated until they were encouraged to participate. She said, “Seeing smiles form on their faces and hearing their infectious laughter as they played left an indelible mark on my heart and proof that inclusion and empowerment changes lives for the better.”

The sports envoy program is a product of joint discussions between US and Chinese leaders at the 2012 US-China Consultation on People to People Exchange meetings in Beijing.

“It was a tremendous honor to represent the USA as a sports envoy to promote disability rights, gender equality, and inclusion in China,” said Clark. “My personal experience as a lifelong athlete with a disability combined with a professional career as a social worker and sports performance consultant proved to be advantageous as a sports envoy.”