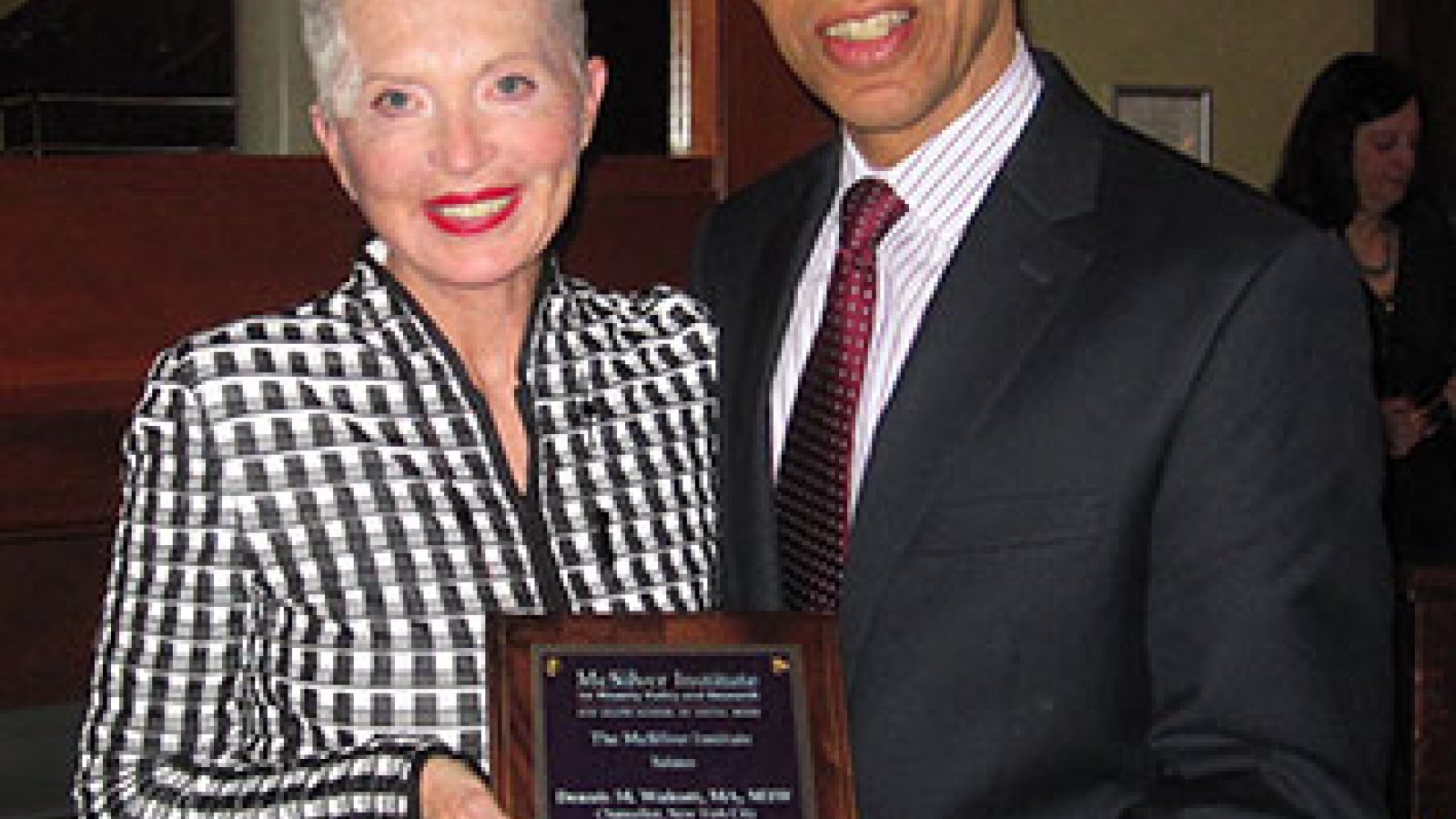 The NYU Torch Club was lively and bright the morning of May 2, 2013, for the first annual McSilver Awards ceremony. The tap room overflowed with NYU faculty and administration, individuals from a wide range of New York City community organizations, and policymakers with values aligned with McSilver’s dedication to identifying the root causes of poverty and developing solutions to address them locally and globally.

The Awards began with a welcome and special presentation by Dr. Constance Silver. Silver and her husband, Martin, were the benefactors of the McSilver Institute for Poverty Policy and Research, whose generosity allowed for its establishment in 2008. Silver began the morning by presenting a surprise McSilver Award to Lynn Videka, professor and dean of the NYU Silver School of Social Work. Videka holds a degree in nursing and a doctorate in social work and has been an outstanding element in the success of the Silver School, producing numerous publications and holding leadership roles on the local and national level in the field. Her award recognized the hard work and dedication she has shown the School and the McSilver Institute over the past years.

Attendees received a second surprise when John Sexton, president of NYU, presented an inspiring speech praising the McSilver Institute and the award honorees for their incredible work. He stated that Constance Silver and the McSilver Institute exemplify NYU’s role as a university that is both in and of the city. Quoting a beautiful African proverb stating that we should all plant trees that others can sit under, he personified the energy of selflessness that the field of social work, and the individuals honored by the McSilver Awards, embody and bring to the world.

Videka followed his opening remarks by adding that the McSilver Institute has been a transformational opportunity for the University to deepen and strengthen the social justice mission of the social work profession. McSilver’s Director Mary McKay and Deputy Director Gary Parker then welcomed the crowd and thanked and congratulated the awardees and the audience for their important work and outstanding support.

The McSilver Awards were then presented. Robert Hawkins, the McSilver Associate Professor in Poverty Studies and a McSilver faculty fellow, introduced the first awardee, Heather McGhee, JD, vice president of policy and outreach at Demos. She emphasized the importance of social work as a voice and advocate of the clients that it serves.

Next, Mary Pender Greene, LCSW-R, ACSW, presented an award to Thelma Dye, PhD, executive director of the Northside Center for Child Development. Dye remarked with great pride the parallel focus between Northside and McSilver in addressing the connection between poverty and race.

Lorie Slutsky, president of the New York Community Trust, was then presented an award by the Katherine W. and Howard Aibel Visiting Professor and Executive-in-Residence Phil Coltoff. Slutsky accepted her award on behalf of the entirety of New York Community Trust, which not only encompasses funders, but organizations who are providing services and the individuals they serve.

Phyllis Barasch presented the fourth award to Karen Brooks Hopkins, president of the Brooklyn Academy of Music. Hopkins emphasized the importance of arts curriculums in keeping children engaged in their schools and community and bringing creativity into the lives of New Yorkers.

Alma Carten, associate professor and McSilver faculty fellow, introduced the penultimate Awardee Rosa Gil, PhD, founder, president, and CEO of Comunilife, Inc. Gil accepted her award on behalf of all Latina adolescents who have attempted suicide, which is a new focus of her Comunilife through its Latina Youth Suicide Prevention Center.

Mary McKay presented the final award to Dennis M. Walcott, chancellor of the New York City Department of Education. Walcott accepted his award on behalf of the 135,000 employees of the Department of Education, including teachers, custodians, administrators, and social workers, who serve our cities 1.1 million school children.

The event concluded with heartfelt words from both McKay and Parker, again thanking the attendees for all of the important and difficult work that they do every day and for their dedication to McSilver’s mission. They expressed their gratitude for the illustrious group of people who came to support McSilver for the awards and who continue to support McSilver through collaboration and partnership to achieve a shared vision of greater social justice and equality in our communities.

McKay stated about the event, “I am so fortunate to be surrounded by such intelligent, caring, and innovative people. McSilver has expanded and accomplished so much in the last two years thanks to the hard work, dedication, and commitment of its partners at NYU, in the New York City community, and abroad. I could not imagine a more exceptional and compassionate group of people than those who joined us today.”

The first annual McSilver Awards ceremony was a huge success, with many colleagues from all over the City connecting over shared achievements in working toward alleviating poverty and its root causes. The truly inspiring stories, hopes, and achievements shared by all who spoke at the event created a heartening atmosphere to begin the day. The awards have set a precedent for many years to come and will undoubtedly become a tradition that will bring together pioneers of the social work field to celebrate those who truly put the “work” into social work, as Parker described in his closing remarks.