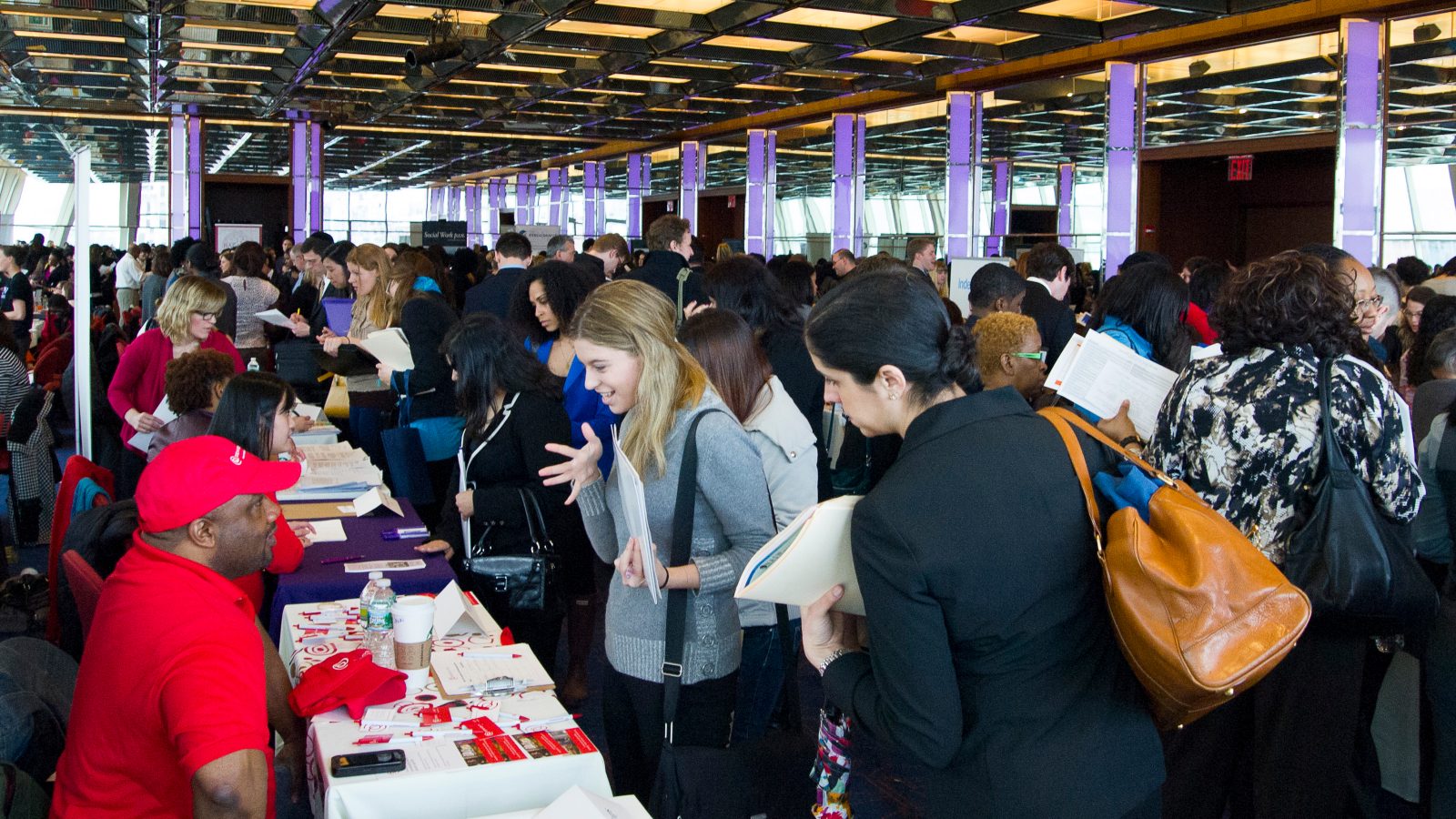 Ready with resumes, business cards, 60-second pitches, and dressed in professional attire, graduating MSW students filled Rosenthal Pavilion at the NYU Kimmel Center for the 2013 New York City Master’s-Level Social Work Job Fair. A space that had been the dance floor of the Silver Ball two months prior, where students were relaxed and dressed to party, was transformed into an arena where students dressed for an interview and strategically maneuvered themselves towards desired employers.

Held on Friday, April 12, the job fair is a collaboration between all social work programs in New York City—with management from NYU’s Wasserman Center for Career Development—and is open to all their MSW students. This year 79 employers and 737 students attended as hosting duties returned to the NYU Silver School of Social Work.

I found myself prepping the night before. Was this what typical graduating MSW students did, creating cover letters for each agency they desired to visit at a job fair? Printing multiple copies of resumes only to find that there’s a problem with the ink, and now I’ll have to visit the UPS store in the morning to print more? Yes and no.

I arrived fifteen minutes early, even before all the agencies had arrived, with another fellow MSW student. On many occasions I saw fellow students smile at one another, squeeze a shoulder, and say, “Good luck!” The room felt more like the 1 train going uptown after 5pm and people all wanted to get off at the Mount Sinai stop, where students waited an average of 30 minutes to over an hour to speak to a representative. The line of job hunters snaked its way around Rosenthal Pavilion.

Most of the students I spoke to had an average of three to five agencies with which they made a point to speak. And there were multiple choices such as child welfare agencies, service providers for the homeless, housing programs, and agencies working with people with disabilities. Organizations in attendance focused on a vast array of issues such as autism, substance abuse, and geriatrics, to name just a few areas of focus. Among the sea of tables were organizations such as BALANCE Eating Disorder Treatment Center that utilizes art and music therapy; Catholic Charities of Brooklyn and Queens that have a number of residences for the elderly; Comunilife, which hosts numerous programs that address poverty and health issues such as HIV/AIDS; Row New York, which uses sports to help youth; and The Children’s Law Center, which provides representation to children in custody.

After visiting over 20 agencies, and four hours of standing and talking to agency representatives, I found myself motivated and hopeful about the future. What MSW candidate doesn’t want the chance to help people as a living? Doesn’t sound like job as much as it sounds like a calling.