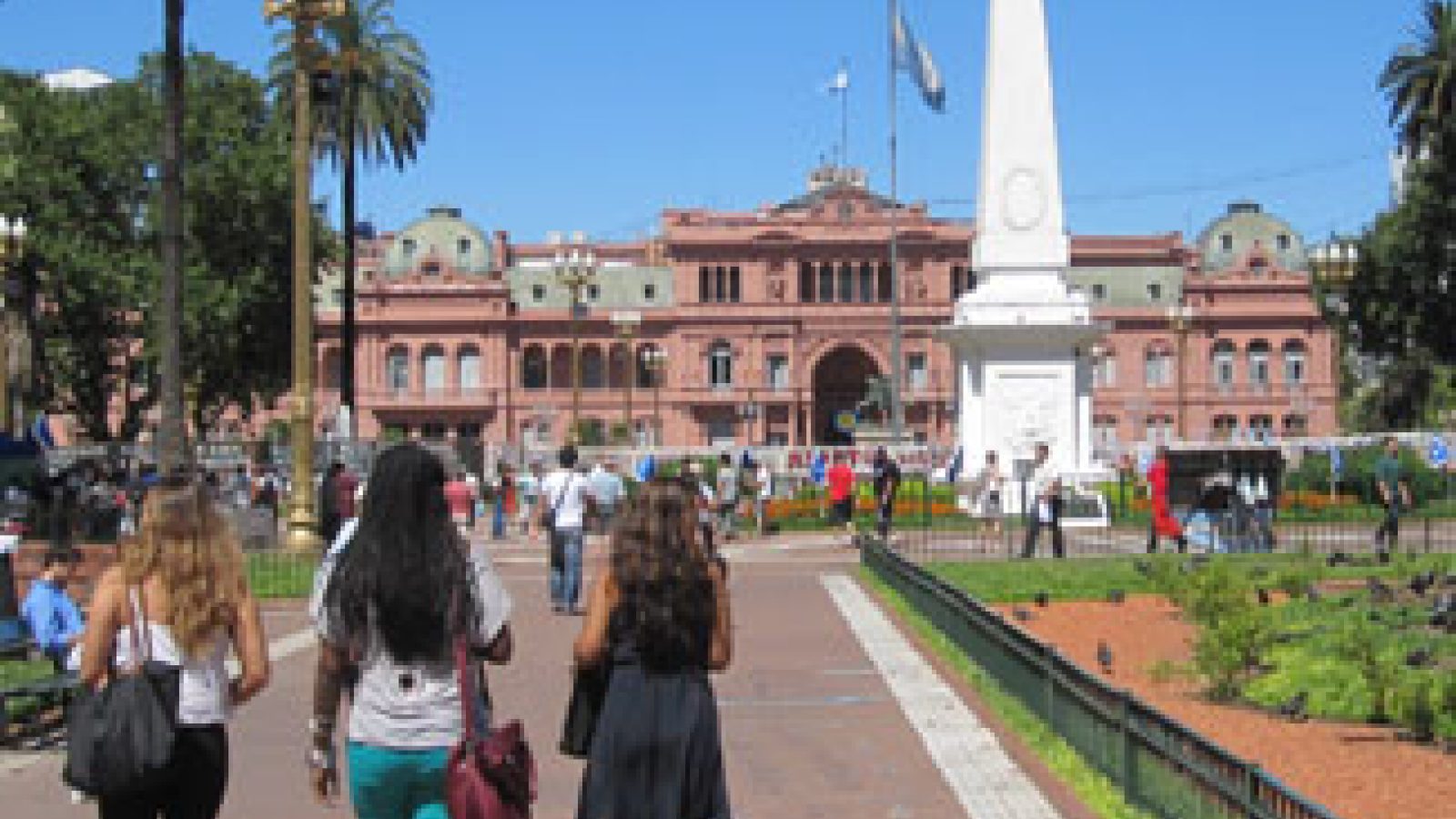 The NYU Silver School of Social Work has expanded its global learning opportunities by offering study abroad courses in the Dominican Republic, Costa Rica, Argentina, Italy, and Mexico. In January, students from the Silver School participated in a pilot course taught in Buenos Aires, Argentina.

Students were able to apply to one of two three-week, three-credit courses developed under the guidance of Mary McKay, director of the McSilver Institute for Poverty Policy and Research -- Macro: Social Justice and Systemic Change from a Global Perspective taught by McSilver Deputy Director Gary Parker and Micro: Global Health Mental Health Care Practice taught by McSilver Senior Research Coordinator Gisselle Pardo. The macro class delved into social movements in the United States and Argentina, community organizing, and the process of creating social change. Elements of the class drew from multiple backgrounds such as public health, history, and social work. The micro course examined key issues in global mental health among impoverished populations. It explored the challenges of providing culturally appropriate evidence-based interventions in resource poor settings.

Saloni Sethi, MSW '13, who registered for the macro course, explained that students had the opportunity to draw comparisons between the United States and Argentina. Sethi noticed two dominant parallels related to the country's socio-economic context. "In Argentina, there is free healthcare for everybody. It's a different reality that changes your whole life." She also noted that voting is mandatory.

Part of the course involved local site visits, and Sethi noted a particularly inspiring effort on the part of one Argentinian woman at a food pantry. The food pantry, known as El Comedor or Los Piletones, is run under the organization Fundacion Margaritas Barrientos, started by a woman named Margarita. What began as Margarita feeding local children in her neighborhood grew to providing food daily to over 1,500 community members. Fundacion Margaritas Barrientos also provides medical care, dental care, job training, and daycare.

"It's all volunteers," Sethi described. "It's a massive operation." Margarita's work has been so successful that people from other communities have begun to move to the town to access services.

"Students spent time in the field, seeing health care delivery in action," said Parker. "It was a great way to build off of class lectures and allows for a fuller understanding of Argentine social service systems. It also facilitates cultural immersion. Being engaged in the community allows students to learn about interventions that are appropriate to that culture."

Students in the macro and micro classes had separate lectures and site visits, but also had some opportunities for shared learning experiences, such as visiting two hospitals together: Hospital Paroissien de La Matanza. Students heard from doctors, social workers, and other health and mental health care providers in Argentina on art therapy, health policy, and social movements. Additionally, students went on a graffiti tour and witnessed how street art connects political activism and history.

Parker discussed the importance of the macro and micro connection, drawing on the site visits, particularly Margarita's work at El Comedor. "You had a member of the community who identified a need and actively organized to develop an intervention to address that need," he emphasized. "It's a wonderful example of successful grassroots organizing."

Throughout the course, students gathered information from site visits, research, and by asking Argentinians familiar with the community, such as doctors, nurses, social workers, and tour guides. At the end of the class, students in groups of four presented on either macro and micro issues in Buenos Aires. Sethi's chosen topic was human trafficking. "This course enabled us to clearly see the connection between macro and micro social work practice," she illustrated. "Our final project identified a growing social problem in Argentina and dove into the challenges of developing a successful intervention." Presentations were also made on the Dirty War in Argentina and on modern concerns, such as immigration.

"It's different seeing things in person as opposed to a textbook and in a classroom," she said. "It tells a different story."

Studying abroad can provide students at NYU Silver the opportunity to study social work through a different cultural lens, but students often end up learning much about themselves. Sethi said that although not speaking Spanish proved difficult for her at times during the trip, she believes that being the "foreigner" can be a good learning opportunity for students and make them better social workers. She explained, "In school, we can sometimes talk about clients as 'other.' We can see how clients, particularly immigrants, must feel being a stranger in a strange land."

Parker echoed his students in that it was not only a learning opportunity for them, but for him as an instructor embarking on a new territory: immersing yourself in a new culture and trying to draw lessons important to social work. He said, "I was incredibly inspired by the political and civic engagement of the people in Argentina, by their continual ability to mobilize large amounts of people to respond to injustice."

A lesson he feels is important to students, and anyone visiting another country is to "embrace the local culture rather than expect it to conform to your expectations." He also noted that he hoped the course will be offered again next year. He shared that he was working with McKay and Pardo to adapt the course based on student feedback.

Sethi encourages students interested in studying abroad to speak to students who have taken advantage of these opportunities. She noted, "I think they would be pleasantly surprised."