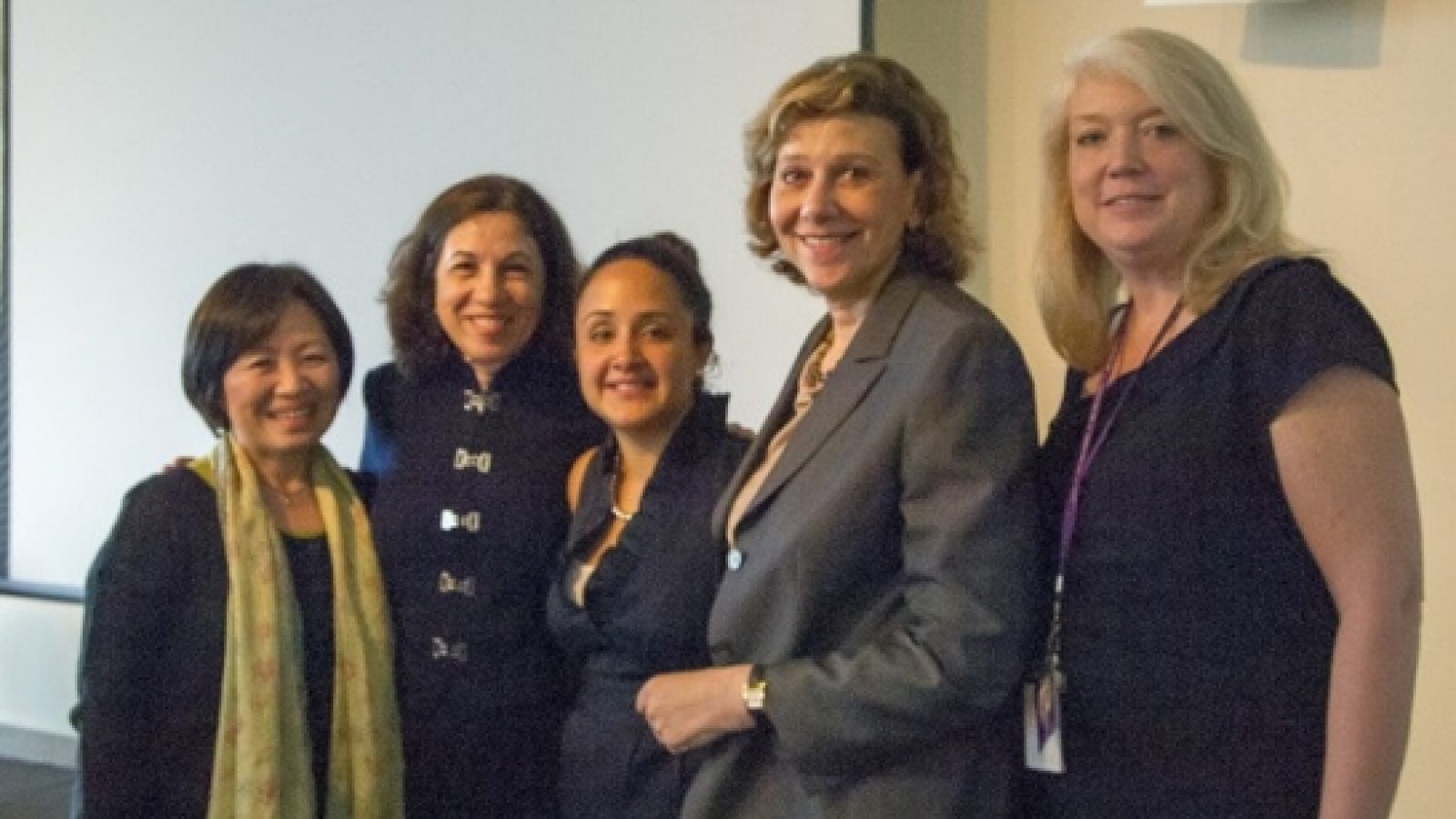 On May 15, 2014, the NYU Silver School of Social Work hosted an emotional conference addressing the difficulty clinicians face assisting people through traumatic events. Approximately 120 people from the fields of social work, therapy, academia, and counseling attended the all-day seminar on Core Principles of Trauma-Informed Care. The conference featured lectures, peer discussion, emotional regulation exercises, and emotionally and intellectually engaging presentations from a diverse array of leaders in the trauma-care field, several of them NYU Silver professors.

Keynote speaker Nelba Marquez-Greene gave a poised, articulate, and poignant address on her personal and professional perspectives on trauma care. Marquez-Greene is a licensed marriage and family therapist and the founder and director of the Ana Grace Project of Klingberg Family Centers. She is also the mother of two young children who attended Sandy Hook Elementary School in Connecticut, site of a mass shooting in December 2012 that took 26 lives. Both children were in the school building on the day of the shooting; her six-year-old daughter, Ana Grace, was killed. Marquez-Greene has since dedicated her life to raising her surviving son.

“Of all the titles I’ve ever had, mom is number one,” she said. But Marquez-Greene has also been thrust into the spotlight by this trauma, and has responded with grace, dignity, and passion, becoming a political advocate for “promoting love, community, and connection for every child and family.” She has focused the Ana Grace Project around her family’s slogan of “Love Wins,” which they adopted in the aftermath of Ana Grace’s murder.

Reflecting on her experiences as a trauma survivor, what Marquez-Greene found most helpful in the aftermath of her own trauma was less the structured, professional supports offered and more the informal networks that built around her family and others, providing “a community of support, connection, and love in the midst of chaos, fear, and loss.”

Likewise, trauma-informed care requires a heightened awareness of the power of time and space. For Marquez-Greene, the rigid structure of 50 minutes at a set weekly time “wasn’t the right model.” Some weeks, at the time of her appointment she would feel okay, and able to function; at those times, the prospect of sitting and delving deeply into traumatic content seemed more harmful than helpful. “For me,” Marquez-Greene shared, “50 minutes wasn’t the right time or model… trauma workers need to be regulated enough to know when and how they can be helpful.”

Marquez-Greene concluded her presentation with questions from the audience, all of whom lauded her for her advocacy, outreach, and articulateness in the face of abject tragedy. She thanked the participants for their words, and, articulating her aftermath experience, shared, “It’s a continuum between overwhelmed and overcoming, and that’s where I walk.”

Following Marquez-Greene’s affective and effective presentation, Tazuko Shibusawa, associate dean of professional programs, gave a lecture on “The Many Faces of Trauma” in which she provided on overview of trauma-based statistics for a variety of often marginalized populations, including individuals contending with severe mental illness, homelessness, poverty, substance abuse, violence and, racism. “There is a variety of trauma that often goes unrecognized,” Shibusawa explained, highlighting illness, accidents, job loss, economic and environmental disasters, racism and oppression as frequently overlooked traumatic experiences. “We need to expand our understanding of what trauma is, and get away from the medicalization of trauma,” she urged. She cited R.F. Mollica’s research on trauma, which posited that all trauma survivors have active self-healing responses within them, and stressed a therapeutic framework of client as teacher, and of forging “a shared empathic partnership to create a new worldview… justice forms the core of the survivor-therapist relationship.”

Associate Professor Carol Tosone presented on evidence-based practice (EBP) trauma models including narrative exposure therapy and eye-movement desensitization and reprocessing. “The essence of trauma is control,” said Tosone, or the loss or lack of it. These two EBP models have proven especially effective because they create an action plan that engages the logical (left) brain in an emotional situation, and gives the individual something to hold onto. Tosone also drew corollaries between trauma-informed care and the crisis intervention model: “The core components of crisis intervention are what trauma care is about, and what gets people through is support systems.”

Associate Professor Judith Siegel furthered Tosone’s discussion of trauma’s impact on the brain with her lecture on the “Neurobiology of Trauma,” in which she discussed left- and right-brain functions, and the cellular impact of traumatic experience. “Trauma is a wound that can alter the cells, structure, and functioning of the brain,” shared Siegel. Brain areas disrupted by trauma include the brain stem, hippocampus, amygdala, and frontal cortex. The impact of trauma on memory storing is especially significant: traumatic memories are often dissociated from consciousness and stored as sensory perceptions, behavioral reenactments, or obsessive ruminations; this often leads to emotional dysregulation. Siegel stressed the need for trauma survivors to strengthen their interoception, or “the ability to ‘know’ multiple aspects of self experience in any given moment, which is essential for being able to comprehend urges and cravings that lead to behavioral dysregulation.” “Knowing” your emotions, she explained, requires connecting the left and right brain circuits, which can be accomplished through developing neural networks through various therapies, including the EBP modalities cited by Tosone.

The conference closed with a presentation on aspects of trauma-informed care led by Mary McKay, director of NYU Silver’s McSilver Institute for Poverty Policy and Research; Linda Ligenza, director of the National Council Clinical Services; and Cheryl Sharp, National Council senior advisor for trauma-informed services. The lecture delved into the essentials of a trauma-informed approach to care, which, according to the Substance Abuse and Mental Health Services Administration include “realizing the prevalence of trauma, recognizing how trauma affects all individuals involved with the program/organization/system, resisting re-traumatization, and responding by putting this knowledge into practice.” Of greatest import in the trauma-informed system of care is the fostering of an environment that ensures physical and emotional safety. Caregiver trustworthiness and consistency, as well as emphasizing the consumer’s choice in treatment plan (which helps to rebuild their sense of control) are also key. The conference closed with a quote by therapist and author Peter Levine that reiterated a theme echoed throughout the day’s proceedings: “Trauma is perhaps the most avoided, ignored, belittled, denied, misunderstood cause of human suffering.”