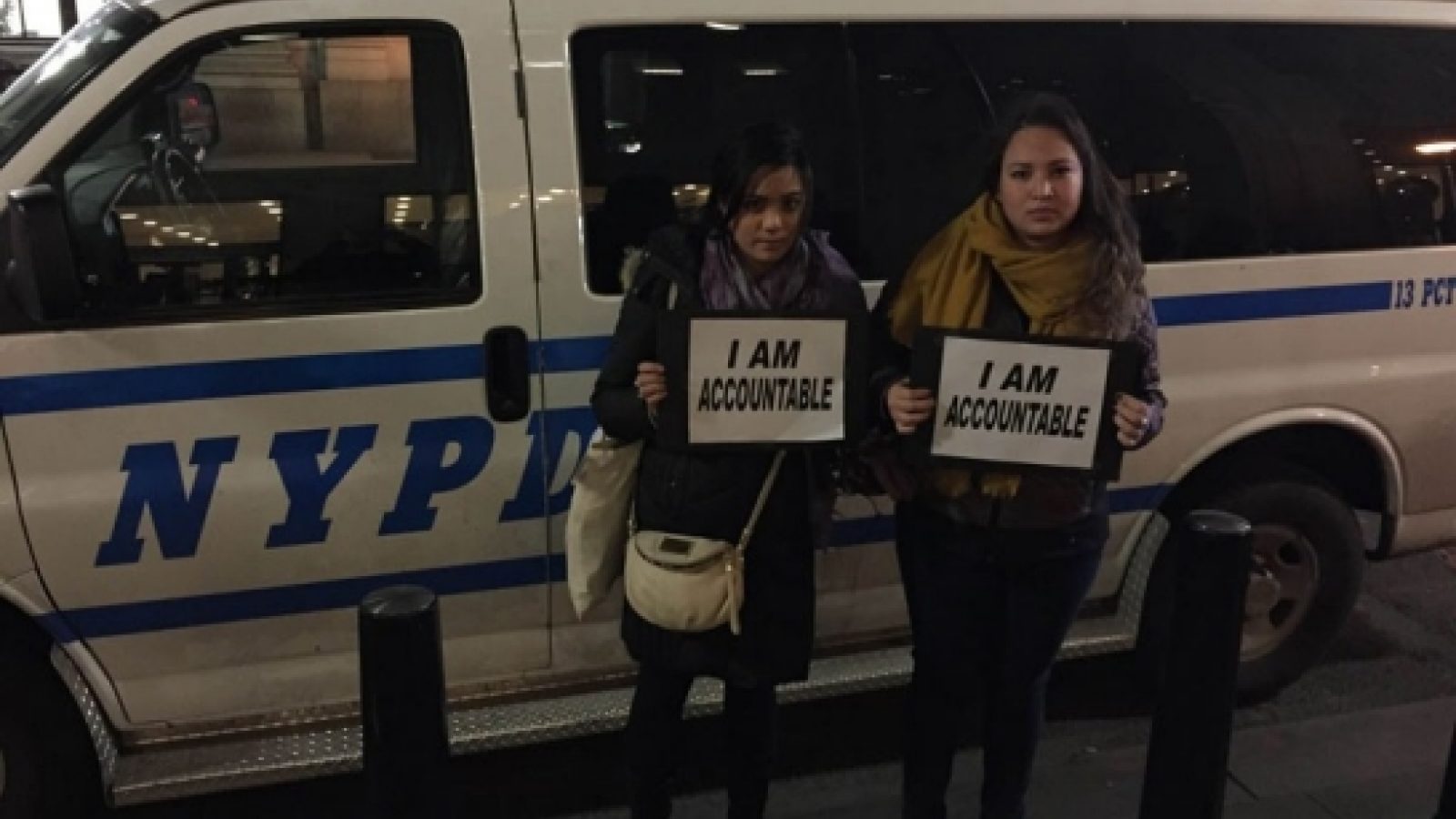 On November 24, a grand jury in Ferguson, Missouri, decided not to indict white police officer Darren Wilson in the death of Michael Brown, an unarmed black teenager. Less than a week later, a grand jury in Staten Island similarly ruled not to indict white police officer Daniel Pantaleo in the July 2014 chokehold death of Eric Garner, an unarmed black male. The no-charge decisions have sent waves of grief, disbelief, fury, and heartbreak throughout the country. As people struggle to process these decisions, many have rallied around the notion of finding a voice through organization, and protests, rallies and marches have filled the streets and have been seen on the news.

The NYU Silver School of Social Work has held several events encouraging community discourse centered around the principles of social justice and advocacy, which form the pillars of the School’s mission.

On November 20, the School hosted a panel event titled “Ferguson in the USA: How did we get here? How do we respond?” As Clinical Associate Professor Diane Grodney shared, “The idea for the panel emerged from the collective efforts of the student, faculty, and staff membership of the Social Justice and Diversity Committee. Within just one week, the panel was organized, students mobilized, and the presentation and discussion ensued.”

The panel’s lead speaker was Adjunct Lecturer David Peters, who teaches courses on structural racism and diversity, racism, oppression, and privilege. He began his presentation with a personal reflection on contemporary media’s depiction of black men as violent, hostile, and untrustworthy. The media seeks to vilify black men, turn the white majority against the black minority, and use fear mongering to eliminate rationality. Peters led the audience in an analysis and scrutiny of the confusing instructions given to the grand jury in the Ferguson matter. Shortly before the grand jury began its deliberations, prosecutors instructed them to disregard a portion of the Missouri law giving police officers broad power to use deadly force. Peters and the panel audience questioned whether these confusing instructions could lead to a fair and equitable decision regarding prosecuting Wilson further. This scrutiny seems especially salient given the jury’s decision shortly thereafter not to indict Wilson in Brown’s death.

Peters called upon history to contextualize the events in Ferguson, stressing our need to understand the imbalance of power and the way it has been, and continues to be, used to oppress and maintain the status quo.

On November 25, the day after the Ferguson decision, Dean Lynn Videka sent out a school-wide email, inviting students, faculty, and staff to participate in several informal reflections held in the NYU Silver Parlor. “At the Silver School of Social Work, we believe and advocate for social justice. That includes an equitable distribution of wealth, opportunities, and privileges for all in society. For too many people of color and others in marginalized groups, social justice is elusive,” she wrote. “In these moments, we believe it's important to find supportive community opportunities to begin the process of making sense of our individual thoughts and collective emotions.”

She also pledged the continuing attention of the School’s Social Justice and Diversity Committee to determine appropriate next steps for the School as a community, and invited students to use their classrooms as platforms for exploration. She wrote, “We encourage you to discuss these issues as they relate to the subject matter in your classes, to engage with the metro area community expressions and conversations, and to continue to be the agents of social change and justice.”

Several NYU Silver students and faculty joined in the protests happening the first week of December following the Garner grand jury decision. Elizabeth Bunker, MSW ’15, joined the protests that started in Union Square on December 3. She was struck by the diversity of the protestors and their enthusiasm. She said, “I got goose bumps at one point while marching because the energy and all the passion in this particular group was indescribable. It felt as though our generation was finally going to stand up to a system that had been built years ago to oppress the black community.” Bunker was interviewed about the protests on Al Jezeera. She said she will stay out and protest “until justice is served.”

Other students marched in a protest on December 4 that started downtown near City Hall and moved north. “As the mom of a young, black male I felt it was my obligation to attend the protest and lend my voice to the cause of fighting this unhealthy wave of police brutality against young people of color,” said Margaret Monroe Woods, MSW ’15. “Being in that crowd as a social worker allowed me to understand fully my role in combating social injustice and that my professional voice must be heard on behalf of those who have no voice.” Woods said she felt “empowered” standing with her social work colleagues. Woods’ photo was included in a New York Times article about the protests.

Anahi Galante, MSW ’15, helped organize students for the December 4 protests. Among the occurrences during the evening that moved her were meeting other NYU Silver students and faculty, drivers honking their car horns in solidarity, and children carrying signs. She said, “There was a multigenerational quality [to the march]. This is important since this issue of institutionalized racism is a pervasive thing that will take many generations to change and dissipate.”

Mara Gottlieb, MSW ’97, PhD 14, and an adjunct lecturer, was encouraged to see members of the Silver School—from all three academic programs—take part in the protests. However, she wishes organizers would think more concretely about next steps. “I was proud to be there, and even more so when I joined up with Silver School members,” she said. “But I look forward to a march/rally/protest that tells New York and US leaders what we want them to do to end the violence, discrimination, and injustice against black and brown people in this country and the rise in police homicides, rather than to simply decry it.”

On Tuesday, December 9, NYU Silver hosted a school-wide moment of silence for victims of social injustice. The NYU Silver students, faculty, staff, and administrators exited the Silver School building and lined up on the sidewalk in front of the School for a moment of silence for Michael Brown, Eric Garner, and others who have been victims of social injustice.