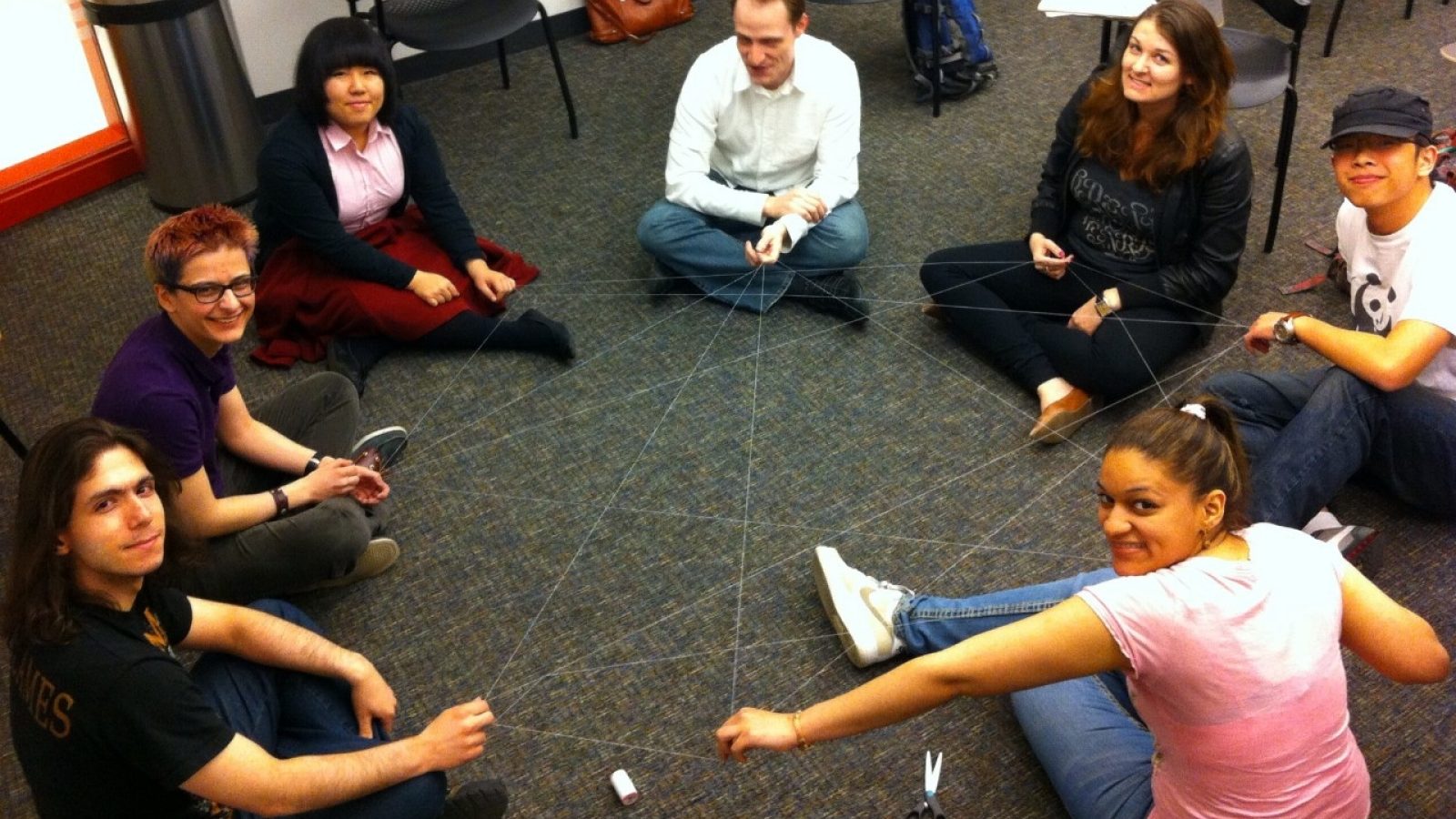 Last fall NYU’s Intergroup Dialogue (IGD) program launched a new section focused on national origin. In its sixth year at NYU, IGD is a nationally recognized eight-week, one-credit seminar for undergraduate students that brings together small, diverse groups of students to share their experiences and learn about diversity and social justice.

NYU offers between five and 10 separate sections each year, examining topics related to gender/sexuality, spirituality/religion, and race/ethnicity. Two years ago the NYU Silver School of Social Work began housing the program, providing course credit. The program is co-sponsored by the Center for Multicultural Education and Programs (CMEP) and the Center for Spiritual Life.

“The objectives of the Intergroup Dialogue course support the social justice mission at the heart of the Silver School,” said Tazuko Shibusawa, associate dean for professional programs and director of the MSW program. “The course provides an ideal environment for undergraduate students to talk about issues related to social justice and diversity, as well as train graduate students in ways to facilitate these discussions that can be used throughout their careers. ”

Monroe France, assistant vice president for student diversity at New York University and the director of the CMEP called the partnership between CMEP/Student Affairs and NYU Silver “exciting and important” as it has enabled the University to grow IGD. France is one of the co-instructors of the course.

“Intergroup Dialogue provides resources and the infrastructure to offer more students the opportunity to engage in sustained and structured dialogue rooted in social justice pedagogy focused on better understanding the experiences of others that may have lived experiences and social identities different than their own.” he said, “But, just as important, it provides a platform for more students to reflect on their own identities and belief systems.”

Why launch this new section?

“It seemed the time was right,” said NYU Clinical Instructor Marcella Runell Hall, who founded IGD and co-teaches the course with France. “We have been thinking about how to incorporate the values of the Global Network University, such as cosmopolitanism, and about what diversity conversations look like in a truly global environment.” Additionally, Hall and her team have been discussing how domestic issues of diversity are connected to citizenship and public policy.

“The guiding assumption is that diversity is an institutional asset and can be used to enhance growth of the NYU community, while also achieving specific educational outcomes,” she explained. The new national origin section focused on issues of immigration, third-culture identity, nationality and citizenship, and how these concepts interact with social justice and diversity.

NYU’s format is based on the program created at the University of Michigan, which has been adopted by colleges and universities around the country. The IGD model focuses on intergroup dynamics within the context of a higher education institution while promoting awareness and change in intergroup relations at the individual, cultural, and institutional levels.

The size of each section is small—about eight to 12 students—and students must apply for the course. This size allows for a sustained dialogue where participants work through psychologically and emotionally challenging topics and maximizes the group’s learning. Participants for each dialogue are also purposefully chosen in order to minimize the feeling of being the only person with a certain social identity or lived experience.

Christopher Woods, CAS ’11, who took an IGD seminar on gender as a student, is now a program administrator at the NYU LGBTQ Student Center. Woods knew he wanted to pursue a career in student affairs and believed this course would be valuable to his career trajectory. He had recently come out to his mother and was still in the process of making meaning of this experience.

“The life map activity was the first time I was able to critically reflect on my lived experiences with my gender and how my gender identity and expression engages with other aspects of my identity, specifically my sexual orientation,” he explained. Woods called this exercise helpful to reflect for the first time on his past experiences around his gender identity and allowed him to become more open around diversity and social justice education.

Alicia Bell, BS ’11 from NYU Silver, took an IGD course in order to become better educated in social justice. “After completing one semester of IGD, I grew a lot personally, understanding myself and who I was at the time, and I also grew a lot interpersonally, learning better ways to interact with others and to have productive conversations around sometimes uncomfortable situations,” she said. “Because of that, I decided to continue doing IGD and eventually became a facilitator for a section.”

Rather than being taught by a faculty member, the IGD model uses graduate student facilitators in an effort to create a more open dialogue among students. Facilitators create lesson plans and support and challenge participants in the classroom to maximize discussion. Coaches support the facilitators in their curriculum development, help them process their own growth, and provide an opportunity to engage colleagues across the university.

After taking IGD as a student, Bell decided to become a facilitator as a graduate student in Steinhardt, from which she graduated in 2013. “As a participant, IGD taught me to find commonalities amongst people who I wouldn't initially think I had anything in common with,” she said. “As a facilitator, I developed skills for better facilitation and better class/workshop structuring. In both scenarios, I had the opportunity to grow the network of people around me who cared about justice and progress in the world.”

Similarly, Arti Aryal, MSW ’14, had a positive experience with IGD as an undergraduate at the University of Maryland, College Park and was interested in helping students work through “identity-defining experiences surrounding social justice issues.” Additionally, she said, “I also do not have a lot of group facilitation experience in general. I wanted to gain this type of experience in a really meaningful way, all the while knowing that I'd have excellent training and coaching in the process.”

Marissiko Wheaton, Steinhardt ’09, worked as a facilitator and a coach. As the residence hall director at the NYU dorm, Carlyle Court, she said the lessons she has learned through IGD have translated to her work every day—the tone she sets with employees and how she manages her own personal and professional power.

“I decided to return as a coach to the program over the past few years because I see it as a part of my responsibility to participate in the growth and development of new facilitators,” she said. “I have taken away so much from this program and I hope to continue staying involved as an advocate of how it positively impacts the experience of so many students.”

New topic sections are piloted each fall semester, and the course now enrolls more than 800 students in dialogues with nearly 100 graduate student facilitators. Many of the new dialogues spring up because of student and former student initiatives. Woods—along with student leaders in the faith-based and LGBT communities—helped develop a dialogue on faith and sexuality. When he returned to NYU as a full-time employee, he wanted to serve an active support role in the program and he now serves as an IGD coach.

“I believed that I had resources that could be helpful for the facilitators as they plan the course material,” he said of his interest in and research and academic study on faith and sexuality. “Furthermore, as someone who has engaged students on these often contentious intersecting identities, I wanted to serve as a sounding board and resource for the facilitators as they navigated these sometimes difficult conversations.”