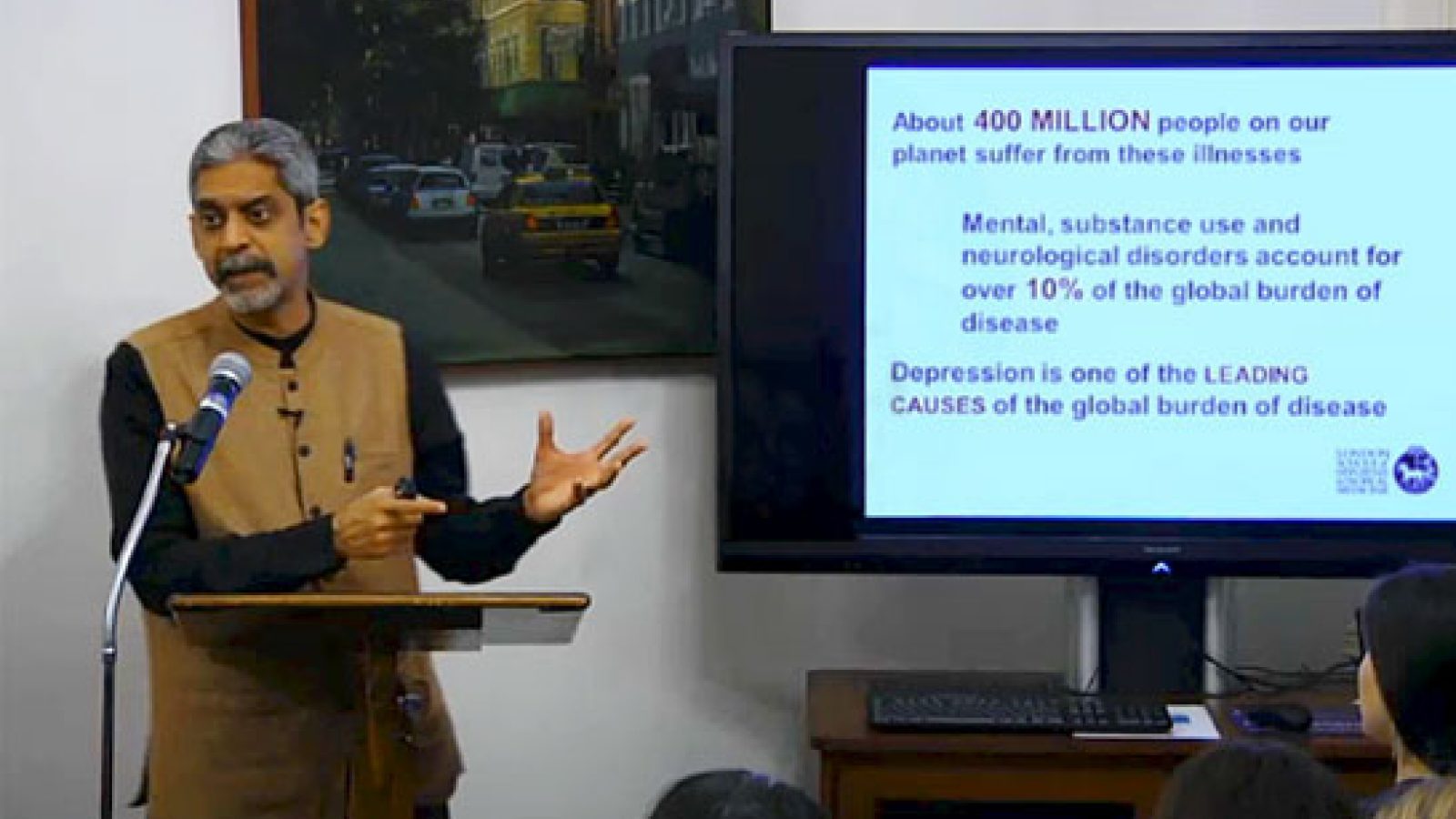 On February 22, Vikram Patel, professor at the London School of Hygiene and Tropical Medicine and a leading expert in global mental health, gave a presentation on "Innovations in Mental Health Care: What Can the Developed World Learn from the Developing?" as part of a collaboration between the NYU Silver School of Social Work, the McSilver Institute for Poverty Policy and Research, and the NYU Global Institute of Public Health.

Patel described the significant issues affecting the state of mental health care around the world. The current state of service delivery is not working and is not available in all parts of the world. He said, "Families have to resort to extreme measures to maintain their relatives' behavior." He described one incident he witnessed in the Philippines where a family kept a relative locked in a room due to schizophrenia.

In the United States, many people newly diagnosed with a mental health condition do not receive treatment within 12 months of diagnosis. Suicide is the third leading cause of death for young people in the United States. Worldwide, these figures are even more daunting.

"Depression is the leading cause of the global burden of disease," Patel stated. Four hundred million people around the world have a mental illness, with approximately 90 percent living in the developing world.

The idea that "mental illness is not from poverty" is a cliche notion, Patel declared. Living in poverty puts people at risk for developing mental health comorbidities, and a lack of access to services can exacerbate their circumstances. He cited a research study in which mothers with depression were 50 percent more likely to have malnourished children. This fact demonstrates how important mental health is in terms of improving physical health and must be on the agenda for projects such as the Millennium Development Goals.

Financial investment in care is far from being implemented, with many countries directing less than 1 percent of their GDP towards mental health. A lack of "affordable skilled human resources" also poses a challenge. India, for example, has a population of 1.2 billion with only 1,000 psychiatrists.

Many clinical interventions are based on a medical model and are not necessarily based on interpersonal relations between clients. "Interventions are highly biomedicalized," he said. "They are delivered in highly specialized areas and the language is alienating." Much of Patel's work incorporates mental health services into the community rather than making people travel to institutions far from their homes.

"We do know about what things can be done," he said, talking about innovative ways to address mental health issues in the developing world by utilizing human capital. He believes a bottom-up approach is the best way to implement effective healthcare in communities. He used a study he oversaw in Goa, India, to illustrate this approach. In Goa, local women were trained in interpersonal psychotherapy in an eight-week course. This study -- highlighted in 2012 in The New York Times -- revealed that of the 3,000 people with anxiety and depression symptoms, 66 percent of those who had received therapy by the local women saw an improvement in symptoms as opposed to the 42 percent who did not receive therapy.

This example of utilizing human capital in the developing world -- where trained mental health professionals and financial investment are lacking -- led Patel to write the book Where There is No Psychiatrist.

Patel proposes the acronym SUNDAR as a guide to design and treat gaps in mental health care in the developing and developed world.

S: Simplify the message
UN: Unpack the treatment
D: Deliver it where people are
A: Affordable and available human resources
R: Reallocation of specialists to train and supervise

"The language of mental health has become ridiculously complicated," Patel stressed. "Ideas have become fossilized." He urges people to rethink how to work with communities in addressing mental health.

In India, depression "loses meaning in translation." Language must be used in a manner that families can understand. He explained, "We can use different words to describe the same thing." Providers can describe the symptoms of depression, and tell clients what they can do to feel better without necessarily having to use the word depression. What is most important, he feels, is to use language that is "acceptable" to the families with whom we work.

Besides his role as an international mental health advocate and faculty member at the London School of Hygiene and Tropical Medicine, Patel is co-founder of the non-profit organization Sangath, located in Goa, India. Sangath is committed to improving health across the lifespan by empowering existing community resources to provide appropriate physical, psychological, and social therapies.