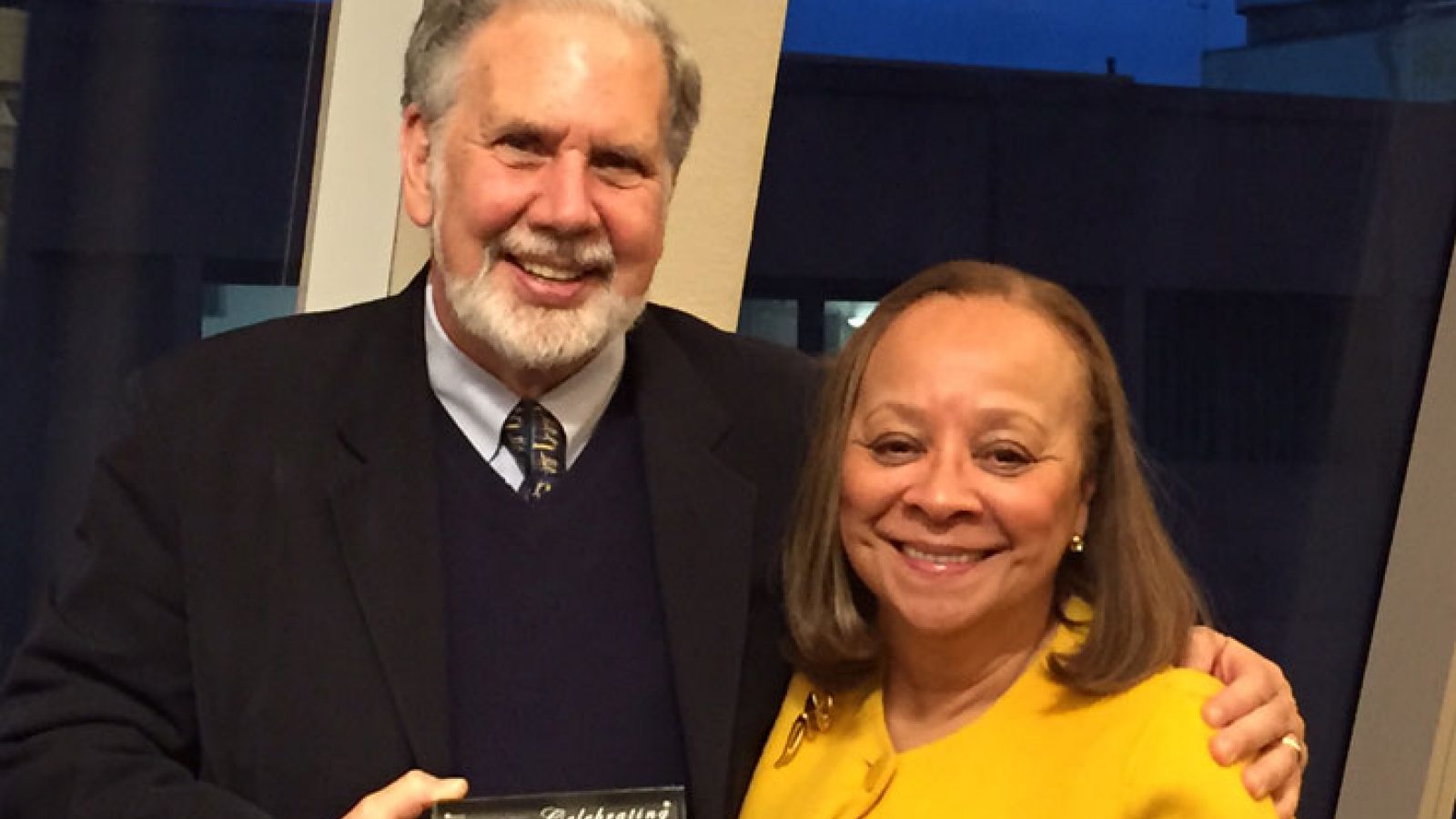 This academic year marked 25 years of service for Associate Professor Alma Carten at the NYU Silver School of Social Work. President John Sexton recognized Carten on April 2 at a celebratory dinner honoring NYU faculty and employees who have been with the university for 25 years.

Carten is best known for her work in the areas of child welfare practice, policy, and program development and delivering culturally competent services to children and families. Most recently, she has dedicated her time to writing and editing two books.

The first—Reflections on the American Social Welfare State: The Collected Papers of James R. Dumpson, PhD, 1930-1990—Carten authored and was just published by NASW Press. It examines social welfare developments over a pivotal 50-year period, when social welfare policy was expanded through New Deal and civil rights legislation and then endured conservative attacks that nearly dismantled these reforms. Carten uses Dumpson’s papers as a lens to view the historical policy changes over this period. The book is intended as a text for social work students learning about social policy.

“He had such a grand impact on social work, not only in New York City but nationally,” said Carten. Over his illustrious career, Dumpson held high New York City government positions under five mayors—he was twice the commissioner of New York City’s welfare agency—and sat on presidential committees under Kennedy and Johnson to advance public policy for children and the elderly. In addition, he was an associate dean at the school of social work at Hunter College, dean of the Graduate School of Social Service at Fordham University, and president of the Council on Social Work Education.

Carten developed a close relationship with Dumpson while she was a doctoral student at Hunter College. She had known Dumpson for many years and asked him to be a member of her dissertation committee. After she earned her PhD, they continued to share a mentoring relationship until his death in 2012 at age 103.

She is co-editing a second book titled Transforming Health and Human Services: Anti-Racist Strategies to be published by Oxford University Press. Practitioners and scholars are writing chapters corresponding to their areas of specialty, such as research; special populations like the elderly, adolescents, and the mentally ill; and children, youth, and families.

Even though Carten celebrated 25 years at NYU Silver, she has actually been at the School longer. She first joined in 1979 after time spent as a social worker in direct service agencies and as a field instructor for the School. She explained, “The School was on the tails of the civil rights movement and was involved in things that felt like my training as a social worker.”

Between 1979 and 1984, Carten was a clinical assistant professor and then assistant director of field learning. One of her favorite memories of that time is a poverty teach-in orchestrated by Columbia University activist social work faculty Richard Cloward and Frances Fox Piven involving all the schools of social work in the city. Students and faculty engaged together in critiquing liberal and conservative views of the poverty debate at that time. “Our students were very enthusiastic about it,” she recalled. “I was leading it here at the School, and I found it very exciting.”

Carten left her full-time position at the School and spent time in city government, including as interim commissioner of the NYC Child Welfare Administration and director of the Office of Adolescent Services for the NYC Human Resources Administration. While Carten considered herself a “direct service person” before her first stint at NYU Silver, by the time she came back full time in 1990 to teach social welfare policy, she developed a stronger interest in policy and program development and evaluation, the focus of her doctoral studies at Hunter. She said, “My experiences in city government had given me first-hand knowledge about the tragic effects of social problems on children and families that are the consequences of poverty and inequality.”

She recalled the response of the School’s faculty to the World Trade Center attacks a transformative experience following her return to NYU Silver. At the time, she was president of NASW’s NYC chapter, and the chapter office was closed due to its Ground Zero location. An extra phone line was installed in her office at the School, so she could maintain communication linkages with the chapter staff and the membership.

“The volume of calls that were coming from social workers across the country offering their help was amazing,” she said. “And our faculty also responded admirably by offering crisis intervention and trauma debriefing services to agencies as they endeavored to respond to the emotional needs of their staff and clients. These events promoted a new awareness about trauma and also played a role in reducing some of the stigma associated with mental illness that was prevalent at the time.”

****
Congratulations, Alma, on your service to the School, your students, and the field of social work! Here’s to many more years with NYU!