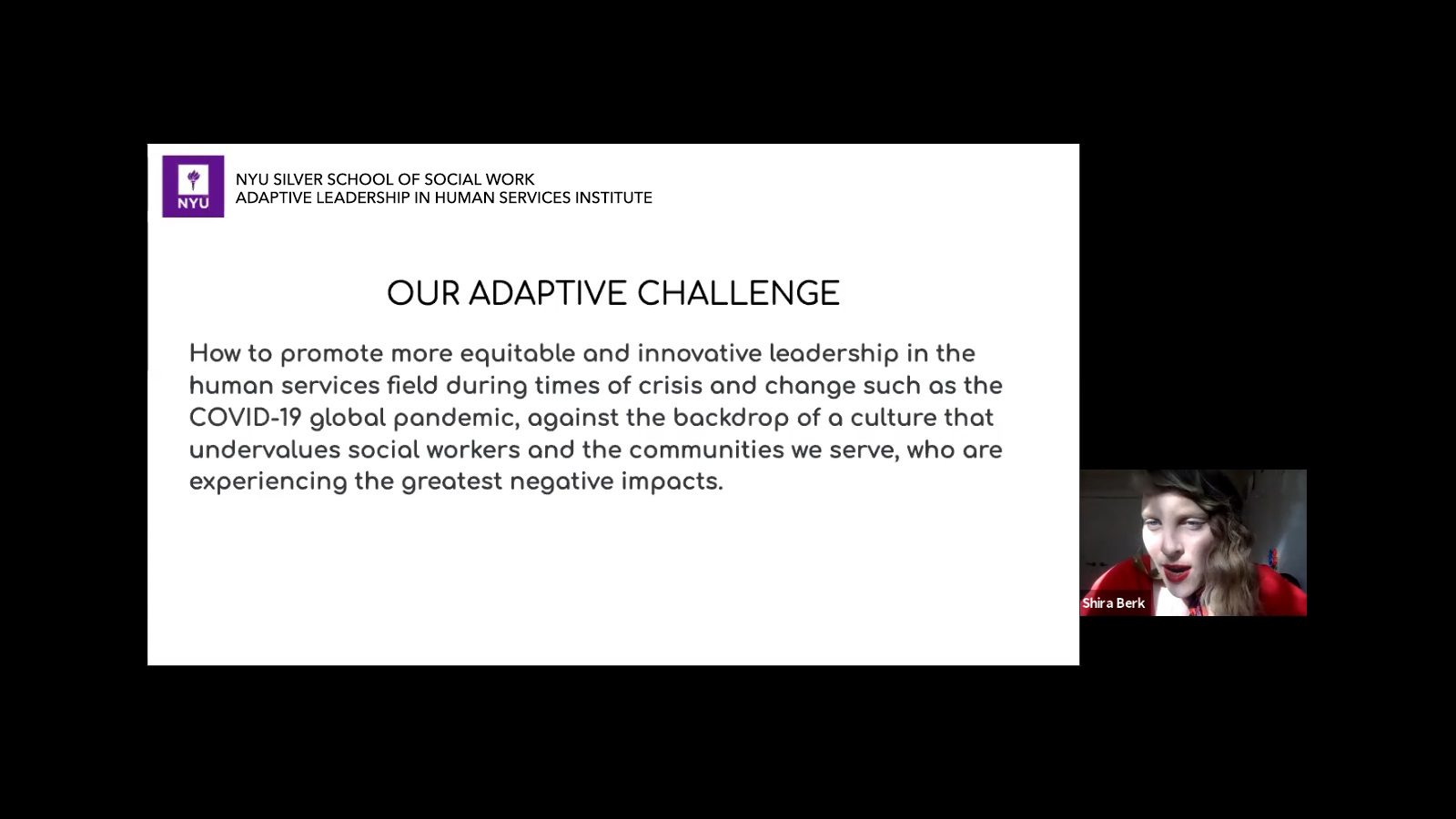 The Adaptive Leadership in Human Services Institute, housed at NYU Silver and led by Master Teacher; Clinical Associate Professor; and Katherine and Howard Aibel Executive-in Residence Linda Lausell Bryant and Adjunct Lecturer Marc Manashil, continued to innovate in the 2019-20 academic year with the launch of a real-time adaptive leadership laboratory known as the Adaptive Leadership in Human Services Task Force. The initiative brought together a select group of social workers trained in the adaptive leadership framework between March and June 2020 to engage in a common adaptive challenge, contextualized for each of their human services agencies, and to share strategies, interventions, learnings, and support.

Organized and facilitated by Play At The Core, a youth development program consulting organization directed by NYU Silver Adaptive Leadership Fellowship alumni Jared Carroll, MSW ’17, in collaboration with program consultant, Shira Rose Berk, also MSW ’17, the Task Force was comprised of six human services professionals who were selected in early 2020 from an impressive pool of applicants. By the time of the first Task Force meeting on March 23, Shira said, much had changed in the world. “We did not plan to have the Task Force meet virtually, but COVID-19 made it a necessity.”

Shira noted that the context of the global pandemic also made the Task Force’s collective adaptive challenge clear. “The Task Force focused on how to promote more equitable and innovative leadership in the human services field during times of crisis and change such as the COVID-19 pandemic, against the backdrop of a culture that undervalues social workers and the communities we serve, who are experiencing the greatest negative impacts.” She added that in the final session, in the wake of the tragic killing of George Floyd by Minneapolis police, “the adaptive challenge was expanded to include both the new pandemic of COVID-19 and the old pandemic of systemic racism.”

Through four virtual meetings, the Task Force members shared adaptive strategies and tactics, and reported qualitative data that they collected on the experiments they implemented within their agencies between sessions. Shira noted that “everything that is done to address an adaptive challenge is an experiment.  These experiments include interventions, which are direct actions intended to mobilize adaptive work.”

On June 24, the Adaptive Leadership in Human Services Institute hosted a virtual panel, open to all members, in which the Task Force members presented their engagement with the adaptive challenge in their unique contexts, highlighting interventions that created change and strategies for sustained engagement with the challenge moving forward.

Shira asked Task Force members four questions related to four themes that came up in the group meetings. She observed that multiple Task Force members designed interventions that aim to address a lack of transparency about budget, salary, or vacation days and she asked those members to share what they did and what they learned.

Among their insights were that sometimes asking a question can be a powerful intervention. One task force member said one of their interventions was asking management to seek volunteers who were willing to come back to the job site as the first step in reopening rather than simply assigning employees to do so. Another’s intervention was asking their CEO to conduct a staff survey to understand staff’s feelings about being asked to come to work in person vs. being allowed to work from home. “Speak up about it, question things,” that person said.

One Task Force member described their organization as “white diverse,” i.e., “there are people of all backgrounds and races in the organization as a whole but the higher you get the whiter it gets.” The Task Force member, who is white, said working with allies from diverse backgrounds was critical. Together, they were able to identify the barriers in the organization’s job descriptions and required credentials and qualifications so they could create new pathways and provide support for people as they move up.

Another said that in their organization, the potential loss of power kicked up fear and avoidance. “There were pushes for training or ‘technical solutions’ as we would call it in our adaptive framework,” they said. “There was a lot of focus on getting the diversity, equity, and inclusion committee together, getting the email out. But there was even some fear of what might come out of just those actions, and concern about white people’s comfort.”

A third Task Force member said an intervention they used a week after George Floyd’s murder was an email to their agency’s CEO and head of HR. The Task Force member had been talking with their own team and protesting, but the agency itself had made no acknowledgement, no public statement, and no outreach to employees to see if they were okay. The email requested a meeting with the agency’s diversity, equity, and inclusion committee and a speakout on how the agency can do better at addressing systemic racism internally and within the communities it serves. While the Task Force member thought their own white identity was important in conveying the request, they said they did so in close collaboration with a Black colleague.

Shifting gears, Shira cited an intervention in which a Task Force member posed the question to their staff “what is it like for you to suddenly be deemed essential?” The hypothesis, she said, was that staff members would express frustration about being put in danger on the front lines, but instead they said they finally felt valued and important upon being deemed essential. The Task Force member who used that intervention described how the pride their staff initially felt at being “essential” wore off. They began to undervalue what they were doing and to resent having to do more than they ordinarily would have to do as a result of the circumstances. However, staff members’ work with clients, who expressed how much they valued them, reinvigorated them and helped them see how essential they really are. The Task Force member observed, “as leaders we have to be careful about how we work with our staff and not take what they do for granted. We need to remind them how essential they are and not just keep building on new demands.” Another said it is a double-edged sword to talk to people about how essential they are and how good they should feel about what they do on the one hand and not provide compensation that is commensurate with that value on the other hand. There was a consensus that their ongoing adaptive challenge includes figuring out “how to use this moment to get the agency to put their money where their mouth is.”

As the panel concluded, Berk explained that the Task Force itself is an intervention to address the adaptive challenge of maintaining and growing the Institute’s community of social justice impact, and sustaining the energy of those who've done adaptive leadership training. She asked Task Force members to share ways that being in the group supported them in sustaining their engagement with the adaptive challenge. And she stressed that examples could be big or small, “because there is really no small movement of the needle.”

One member said being in the Task Force shaped and changed their perspective and helped them realize they have much more agency than they had thought. Another said being in the Task Force enabled them to appreciate how powerful small acts can be, and that they can have big ripple effects. A third agreed, noting that having small things happening in more places builds momentum. Furthermore, they said when you have to report it back to the group, it creates accountability and helps you workshop and adjust your interventions to make them more influential.

A member likened adaptive leadership to anti-racist or anti-oppressive work in that it's not short term and it is extra work that you can choose not to engage in. “You are dismantling behaviors, practices, and policies that have worked for certain people and many would choose for them to remain that way,” they said. “It's a labor of love because you care, and you have to want to see the change. I often feel angry or crazy and this group helped remind me that I'm not. Whether it's dismantling racism and white supremacy or dismantling the undervaluing of social workers, you need community because you can't do this work alone.”

Another member echoed the need for the community of change agents to push and support each other. They cited especially the support and accountability they, as a white person received to be, as MJ Knittel said, not just an ally but a co-conspirator, thinking of ways they can act and intervene and take steps to disrupt racism.

The final member said the Task Force always reminded them to use their adaptive leadership “toolbox.” They explained. “Sometimes I’m so caught up in my emotions I don’t know which one to use. When you go back to your toolbox, when you look at the framework, there's usually something you can do or someone who can help you.” Having the Task Force help them use those tools, they said, “was one of the biggest things that helped me sustain through some really challenging times.”