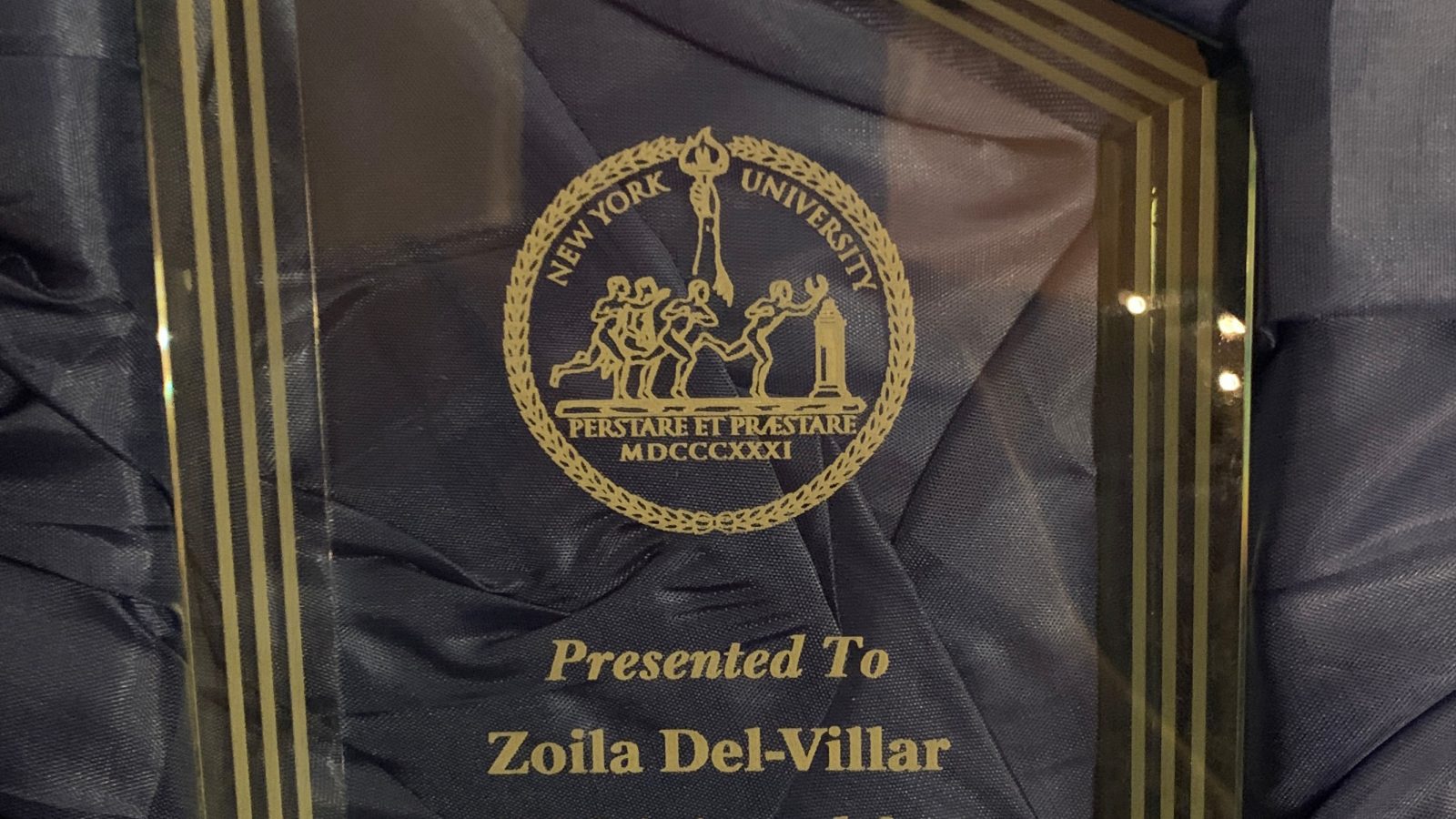 When the call for nominations for NYU's Distinguished Teaching Award was circulated in October 2019, undergraduate seniors in Adjunct Lecturer Zoila Del-Villar’s Social Welfare Programs and Policies class welcomed the opportunity to recognize their teacher’s contributions to their intellectual, professional, and personal development. They agreed she met the key criteria, including “A record of outstanding teaching effectiveness both within and outside the classroom,” “The ability to inspire, promote, and sustain the intellectual development of students,” and “Demonstrated scholarly/professional contributions and their integration into the classroom that foster critical thinking and challenge students to independent inquiry.” Upon looking at the award eligibility, however, they were dismayed to discover that only full-time professors with at least ten years of service at the University were eligible.

The following Wednesday morning, after Del-Villar’s class, Keren Agurcia and Sam Ganem, both BS ’20, decided to try to find a loophole. That afternoon, NYU Silver was hosting one of its periodic Pizza with the Deans gatherings, an informal opportunity for students to meet and have conversations with school leadership. With encouragement from her advisor, with whom she had a previously scheduled meeting, Aguricia said she approached Dr. Robert Hawkins, Assistant Dean and Director of the School’s Undergraduate Program. According to Aguricia, it was Dr. Hawkins’ suggestion that she and her peers bring the idea of establishing an award for adjunct faculty to the School’s Undergraduate Student Government Association (USGA).

At the students’ Practice class later that same afternoon, Agurcia gave a brief slide presentation, including Del-Villar’s picture and the proposal that USGA establish not just an award for adjunct faculty, but one specifically named for Del-Villar recognizing both teaching excellence and character. The proposal received unanimous support.

Aida Sidi, BS ’20, the co-president of USGA and also a student in Del-Villar’s class, helped her classmates secure a place on the next USGA meeting agenda. Ganem attended the meeting and spoke on behalf of the class. “I explained why we specifically wanted an award named after Zoila to acknowledge what she has done for us,” he said. “Our placements are very difficult and a lot of us are going through our own personal challenges, but when we came into her class on Wednesday morning, it all fell away. Even if what we were discussing did not make sense at first, Zoila pushed us to work across our differences and supported us constantly. She wasn’t just teaching us how to be good social workers, she was teaching us how to be better people and it is of paramount importance that that be acknowledged, recognized, and honored.”

Aguricia added that Del-Villar taught more than just the course content. “Everything we learned in that class is something I could transfer to something else in my personal, academic, or professional life,” she said.

“Ignorance is welcome in my classroom,” said Del-Villar. “My classes are intellectually and emotionally challenging. It is my job to engage students and make the content relatable and understandable.” She added that in a course that examines social constructions and how they relate to social policy and programs, “it is important to bring students together to acknowledge their differences, but beyond that to bridge those differences and create a community beyond what people in a classroom traditionally have.”

The USGA was compelled by Ganem’s presentation and the unanimous sentiment of his classmates. They voted to establish the Zoila A. Del-Villar USGA Award for Excellence in Teaching and Character and on December 11, 2019, they presented the inaugural award to Del-Villar herself.

“I don’t want the story to be about me,” said Del-Villar. “This narrative describes what social justice looks like: a group of social work students in a policy class who organized among themselves and impacted policy change. The legacy of this award is theirs.”