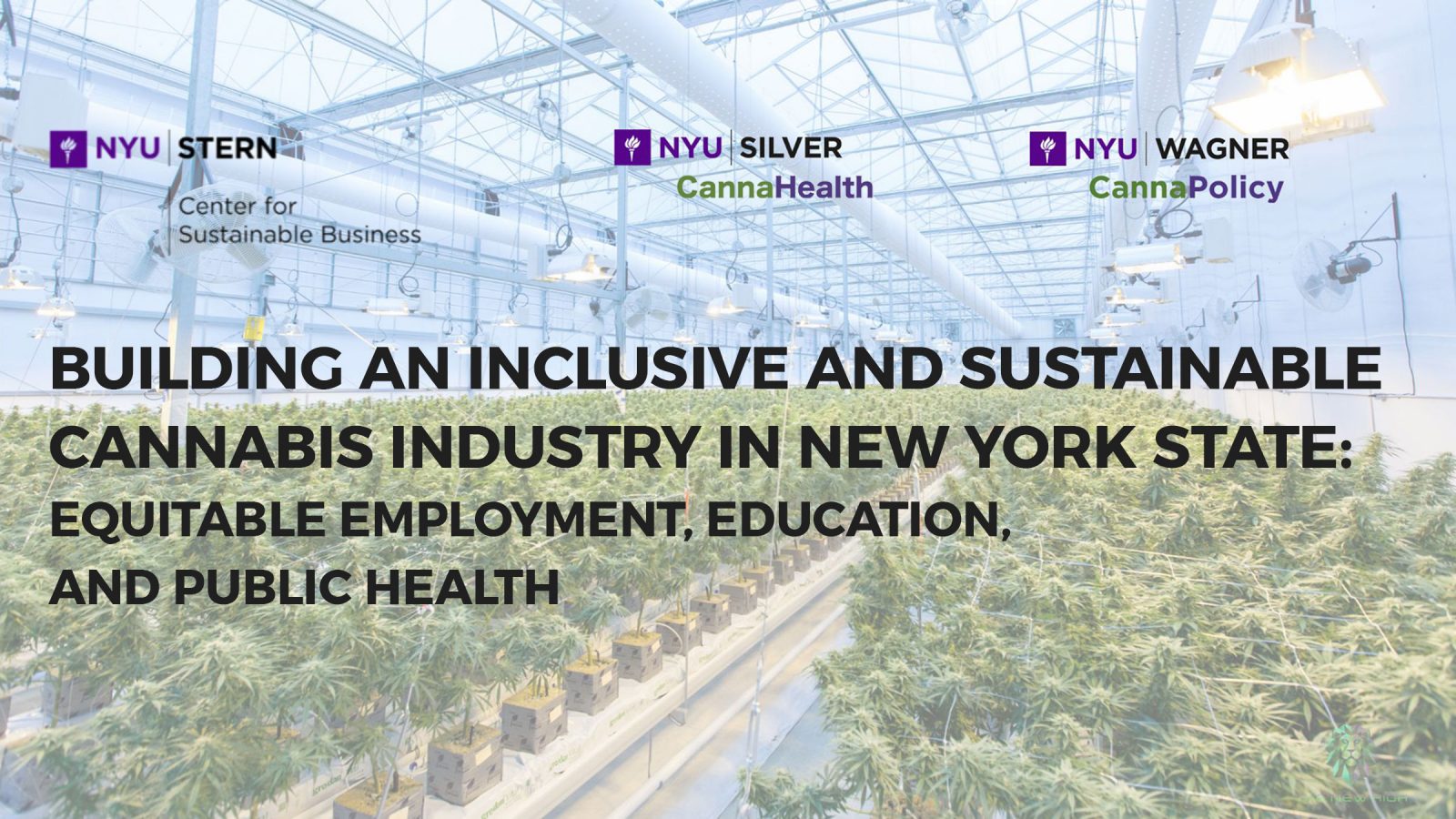 More work must be done to ensure that New York State’s burgeoning legalized recreational cannabis industry fulfills its promise of providing career opportunities to communities that were hardest hit by the war on drugs, experts on cannabis equity said at a recent virtual panel hosted by NYU Silver.

The program, focused on equitable employment, education, and public health in the cannabis industry, was part of a three-part series of conversations with the overarching theme “Building an Inclusive and Sustainable Cannabis Industry in New York State.” NYU Silver and our student group NYU CannaHealth partnered on the series with NYU Stern Center for Sustainable Business and NYU Wagner and its student group NYU CannaPolicy.

The event also featured remarks from Deputy Manhattan Borough President Keisha Sutton-James, who spoke about efforts in Manhattan Borough President Mark Levine’s office to ensure New York State does not make the same mistakes that many of the states that came before it to scale up opportunities in the industry for communities most harmed by criminalization and protect public health. “Our focus,” she said “is squarely on maximizing this moment to right some of the wrongs that were done through ‘cannabis prohibition.’ That sounds so clean and academic but it was a war. It was called the ‘war on drugs’ but it was really a war on Black & Latin people.”

Putting the Conversation in Context

NYU Silver Dean Michael A. Lindsey set the stage for the wider discussion, noting that nineteen states and the District of Columbia have legalized recreational cannabis, an industry that is projected to top $41 billion in the United States by 2026. The enactment of New York State’s Marijuana Regulation and Taxation Act (MRTA) in March 2021 legalized the production, sale, and use of marijuana in New York State, and importantly required that 50% of all licenses be provided to “social equity applicants.”

Dr. Lindsey explained, “There is an important role for social workers to play to ensure that New York State fulfills its commitments to the communities most damaged by former marijuana laws. We must help ensure that public health is prioritized over profits. There is also a role for social workers to help those who are ensnared by marjuana criminalization and other justice-impacted individuals to access the supports and opportunities that are available to them, as well as to counsel individuals struggling with substance use disorders.”

After his remarks, Dr. Lindsey introduced NYU Silver alum and Adjunct Lecturer Terrence Coffie, the Founder and CEO of the Social Justice Network, who helped coordinate the event with Silver’s Office of Diversity, Equity, and Inclusion.

Mr. Coffie noted that an obstacle all the states that have legalized recreational marijuana, including New York, have encountered is “making right the over incarceration of those individuals in Black and Brown communities.” He referenced the 2018 New York Times story Surest Way to Face Marijuana Charges in New York: Be Black or Hispanic, which cited a study finding about 87 percent of those arrested under the state’s marijuana laws were Black or Latinx/e. “It’s important that as we have these conversations and we begin to define ‘justice impacted’ that we have a clear understanding on who those populations are, who those individuals are, and who those communities are,” said Mr. Coffie. “Although we’re all in support of the legalization of marijuana and support of businesses, etc, it’s critically important that the work that we do prioritizes those individuals in those communities.”

Mr. Coffie transitioned to a pre-recorded conversation with NYU Silver Clinical Assistant Professor Kirk “Jae” James, who put the disproportionate enforcement of marijuana laws in Black and Brown communities in the context of America’s historic criminalization and exploitation of Black people, especially Black men. Dr. James stressed that we need to demand accountability from our government to ensure that the “social equity applicants” and “justice impacted communities,” who are meant to benefit under the MRTA, are really those who have been directly impacted by marijuana criminalization.

Mr. Coffie then moderated a live panel on “Ensuring Employment Opportunities in the Cannabis Industry for Those Ensnared in Cannabis Criminalization” with Sean Farrow, an associate attorney with the law firm Hamilton Clarke, and Danielle Schumacher, the Co-Founder, President, and CEO of THC Staffing Group. Among other things, they noted that the percentage of people who own licenses and are employed in the cannabis industry must reflect the population that has been incarcerated as a result of criminalization. Right now, they said, New York State’s medical marijuana industry is almost entirely white owned and majority white employed. For there to be true equity as suggested by the law, they said, we would need at least 87% of the recreational cannabis industry to be Black and Brown owned and staffed.

Both Ms. Schumacher and Mr. Farrow echoed Dr. James’ point about holding people in power accountable. Ms. Schumacher said one way social workers can help ensure the law is implemented as intended is to “really know the ins and outs of the regulations, the rules of the game. New York is just barely releasing those rules, and it’s going to take a lot of ongoing work to continue to improve the rules to include who we were originally intending to include.” Mr. Farrow made the point that the government has to “find a way to bring the legacy operators from out in the cold to into the fold.” He said those legacy operators, who have been operating illegally for many years, are the Black and Brown people who have been most affected by cannabis prohibition. He added, “If we’re going to support these businesses, we actually have to support them. There should be insurance, banking, loans, etc.”

The second panel, on “Ensuring Workforce Development in the Cannabis Industry for Justice Impacted Populations,” was moderated by Hasaan Austin, Managing Partner of MTN Biz Development, and featured panelists Nikki Kateman, Political and Communications Director for Local 338 RWDSU/UFCW; Jamil Myrie, Founder & President of the Black Cannabis Business Alliance; and David Serrano, Project Manager at the Cannabis Workforce Initiative (CWI). The panelists all stressed the importance of bringing information about workforce opportunities to people where they are developing trust with the community.

Ms. Kateman noted that a priority for Local 338, whose membership includes workers in New York State’s cannabis industry, is not only preparing justice-impacted individuals to enter the cannabis job market but also make sure they understand their rights as workers. Mr. Serrano said that CWI’s model for ensuring cannabis workforce development programs are reaching justice-impacted communities has been developing a comprehensive curriculum, making that education free of charge, and meeting justice-impacted people “where there are” with information about the opportunities. “To create true equity and diversity,” he said, “a number of communication tactics need to be deployed. It can’t just be emails. It can’t just be social media. We have to meet people at the bus stops at night when they’re coming home from a long day of work. We get in the streets, we hand out flyers, we let them know that there’s going to be a community event, and we point out where that event is going to be.” Mr. Myrie stressed that the cannabis industry “is not an easy business from an operational standpoint,” citing particular challenges in grow facilities, processing and manufacturing, and retail stores, as well as the need to stay on top of regulations and compliance. As a result, he said “when we have this conversation about building an inclusive and sustainable New York cannabis industry, the education and the training is extremely, extremely important.”

The final panel, on “Protecting the Public Health in a Capitalist Cannabis Industry,” was moderated by NYU Silver alum, Adjunct Lecturer, and NYU CannaHealth Faculty Advisor Jan Roberts, DSW ’19, and featured Dr. Paloma Ledfelt, Senior Director of Clinical Science and Partnerships for Goodness Growth Holdings, and cannabis professional Adriana Myles. “To right the wrongs of our past,” said Dr. Roberts, “we have to take into account the public health implications…Cannabis is not the demon weed but it’s not the panacea either.” She noted that she has worked and taught in the cannabis space for many years and seen incredible benefits for patients she has worked with, however, “I’ve also seen the other side of it, and it's fascinating to me that in the cannabis space it’s almost stigmatized to talk about the downside of cannabis.” As we move to a legalized recreational cannabis industry, she said, “we need to address the clash between the profit motive and public health.”

Against that backdrop, Dr. Roberts, Dr. Ledfelt, and Ms. Myles all expressed concern about the potential negative effects of high amounts of THC, which are common in the most popular cannabis products. In fact, Dr. Ledfelt said people with certain diseases, including schizophrenia and some intense cardiopulmonary diseases, should not be using high amounts of THC, and should purchase their cannabis from a dispensary, where you know within a small margin of error the amount of THC and other cannabinoids in your purchase. Ms. Myles spoke about the different cannabinoids, and noted “while the high TCH we're seeing sometimes can have some negative effects in terms of functioning if you don't know how to dose yourself correctly, with the less psychoactive cannabinoids CBD and CBN, you have a more of a safer option to dose yourself for what you need, especially with CBD for anti-anxiety and upliftment.” They spoke about the need for more education about cannabinoids for both consumers and the medical community, and in particular the need for funding for consumer education and intelligent conversations about the different cannabinoids and what they can do.