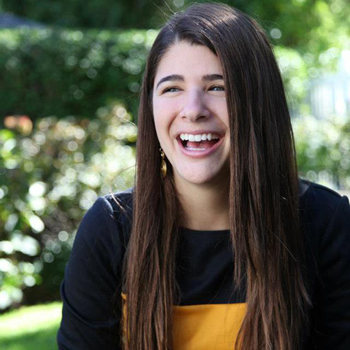 Founder, Knock Knock Give A Sock

Two-time NYU Silver alumna Adina Lichtman is a social entrepreneur. As a sophomore in November 2014, Adina established Knock Knock Give a Sock (KKGS), a non-profit organization that facilitates the collection and distribution of socks to people experiencing homelessness. The following year, in partnership with classmate Terrence Coffie, she began organizing periodic “Meet Your Neighbor” dinners to bring together people who are experiencing homelessness with those who are not in order to foster discussion and reduce the stigma associated with homelessness. Since earning her MSW, Adina has led KKGS full time and has integrated The “Meet Your Neighbors” dinners into the organization’s model.

How did you start Knock Knock Give a Sock?

I had been giving out sandwiches to people experiencing homelessness as the Community Service Chair for Hillel on campus when one of the men I gave a sandwich to said what he and other homeless people could really use are socks. I went to my dorm room to get a pair and decided to knock on every door on my floor and ask each person to donate a pair of socks as well. In about 15 minutes I had over 40 pairs. I recruited other NYU students to help out and by the time I graduated, Knock Knock Give a Sock was on over 20 college campuses in some companies too, and had distributed around 100,000 pairs of socks to people living on the street. By early 2020, we had partnerships with 523 schools and offices, had collected over 1.5 million socks, and had distributed them to more than 600,000 homeless people across the country.

Where did the idea of the Meet Your Neighbor dinners come from?

When I was still an undergraduate, I was invited to an event in Washington, DC for Jewish students who had started organizations on their campuses. In one session, we were asked, “if you could do anything with your organization’s brand, the wildest thing you can think of, what would you do?” I said I would love to bring together students with people who are homeless to have dinner side by side. The woman running the session looked at me and said, “That’s not crazy. You can do that.”

The idea came from the realization that as college students on a liberal campus, we are sensitive to many different communities and are often very sensitive about the language we use, but not when it comes to people who are homeless. Fellow students would ask me “Aren’t they all drug addicts? Aren’t they all lazy? Why aren’t they working?” I was getting these questions all the time. It occurred to me that students involved in Knock Knock Give a Sock were meeting their neighbors where they live but they were not meeting their neighbors on the streets or in the nearby shelters. I sold the dinners as “meet you neighbors while meeting the needs of others.” Today KKGS uses a two-step model where we first encourage a company, school, or community to host a sock drive, after which we offer them the opportunity to host a Meet Your Neighbors Dinner. These dinner programs foster community engagement; effectively turning the transaction of simply donating socks into an interaction that further the aim of breaking stigmas while breaking bread.

How did you go about setting up your first Meet your Neighbor dinner?

It was a battle! I went to a lot of different people and places to see if they would be interested in funding a dinner between students and clients from the Doe Fund but I was met with a lot of resistance. A lot of people thought what I was planning to do would be exploitative and they dissuaded me from doing it. They were concerned that people experiencing homelessness were going to be asked questions that would make them uncomfortable. I thought they just did not see what I was seeing and I was determined to move ahead.

Then my supervisor at the women’s homeless shelter where I was doing my field placement at the time said something that reinforced my resolve. I was working with my first client and I explained there were questions I didn’t want to ask her because I didn’t want to be offensive. My supervisor said, “What our clients have been through is unimaginable. A question might come across as offensive but just remember that you are doing this in order to help and what you ask out of general curiosity or to help and learn is not going to hurt them more than what they have already been through.”

The real turning point for me was in the fall of 2015 when we started to plan the first dinner with the Silver School Graduate School Association and there were still people who didn’t understand what we were trying to do. After one particularly difficult meeting Terrence said to me “I see the vision that you have, we have the same vision, and we’re going to make this happen.” To not have the vision alone anymore changed everything.

Do you have a memory from an early Meet Your Neighbors dinner that stands out?

At one dinner, a woman from FACES NY, a non-profit that provides supportive housing and other services to people living with HIV/AIDS and their families, spoke about how hard it is for her family to put food on their table and put clothes on their backs, and how when she goes outside she feels scared on the street. She asked, “How come your community is so different than mine? What is going on here?” And that question led to such an important conversation.

In social work school we have the privilege of talking about privilege. The people we are bringing to the dinners do not have the same framework in terms of the conversations we have in class and so the issues come up more organically.

Were there things you learned at Silver that have helped you in this effort?

I think that there is so much that I have learned in terms of the system, the policies, and the history that cause certain people to be homeless. All that I have learned and read – like The New Jim Crow – has helped me understand why things are the way they are and enabled me to express that as I talk about these Meet Your Neighbor dinners with various communities.

Which NYU Silver faculty have been most influential to you?

There have been a lot. Dr. Robert Hawkins is one of them. He spoke as a guest lecturer in a number of my classes and he was the first professor to know what I was doing [with KKGS]. He is someone from the beginning who was constantly giving me the green light, so he has been a huge component of the work that I have done. Even with the dinners, where I met with resistance, he said, “I think it’s a great idea and you have just got to keep going.”.