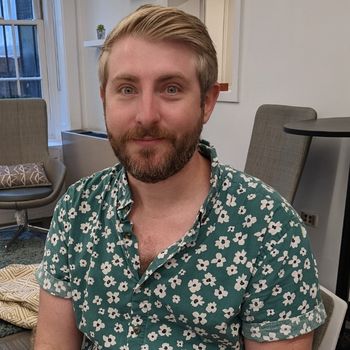 Academic Year 2022-23 Graduate Student Association President and Graduate Orientation Leader Eric Pratt is a native of rural Maine. He earned his BS in Animal Sciences from the University of Vermont in 2013 and went on to work at the University of Maine at Farmington TRIO program, a federally funded program that provides support, advising, and mentoring to low-income and first-generation college students.

In late 2020, Eric was at a point where he realized he needed to pursue higher education. “I had been thinking about graduate school for a while but at first I wasn’t sure which field to go into,” he said. “With the work I’d been doing, earning my MSW just made sense. My work was related to social work but I didn’t have all the skills to go with that, and I was drawn to social work’s social justice perspective and the many professional avenues it opens up.”

Eric’s long-term goal is to start his own organization for LGBTQ youth in rural Maine – an organization he wished he’d had growing up. “Ultimately, that’s what drove me to choose Silver. I want to take what I learn here and bring it back to a rural community, where things are different. There are so few supports there and the youth there really need them.” In his Field placement this year, Eric will be gaining critical skills to help him reach that goal at the Ali Forney Center, the nation’s largest non-profit providing shelter and comprehensive support services to homeless LGBTQ young people.

Another advantage of being at NYU, said Eric, is gaining an understanding of his identity and positionality as a white man. “DROP (Diversity, Racism, Oppression, and Privilege) was a particularly formative class for me, and while I have lived in urban areas before, no place quite like New York City, where there’s so much diversity. As a result, I’ve been doing a lot of reflection and thinking inward about my identity and how that plays a role in other people’s experiences. I’m really excited to be taking Advanced DROP this year and to continue with that reflection and learning.”

Another class Eric found particularly influential was his Practice with Groups class taught by Graduate Student Adjunct Daniel Baslock. “I didn’t necessarily want to work with groups,” he said. “From that class I realized that it is kind of a cool way to do the work. I see myself getting more involved in that type of therapy in the future.”

Eric got involved in student life at Silver as soon as he arrived last fall and was soon elected as GSA First Year Representative by his classmates. Asked what motivated him to step up as a student leader, he noted that in his prior career, he served on a number of boards throughout New England and really enjoyed it. “I found that I like doing work that helps bring people together and also creates space for people to bring concerns and do big picture planning. I wanted to continue to have that level of involvement at Silver and do things that I didn’t take advantage of as an undergraduate.”