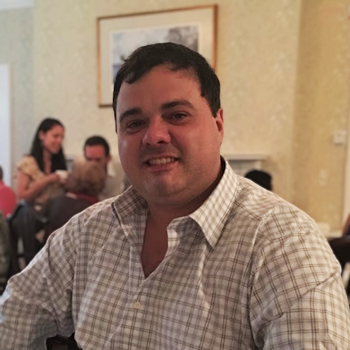 Since Jonathan Coico graduated from NYU Silver’s Westchester County Campus in Spring 2019, he has worked at Silver Hill Hospital, a non-profit facility in Connecticut that provides treatment for adolescents and adults with psychiatric and substance use disorders. He began as a Residential Counselor and was promoted in March 2021 to a Transitional Living Program (TLP) Clinician. In addition, after he passed his LCSW exam in September 2021, he launched his own private practice. Jonathan recently spoke with NYU Silver about the impact he has in his career and the role of his NYU Silver education.

What does your role as a TLP Clinician entail?

I am an individual and group therapist in Silver Hill’s Transitional Living Program, which is a 28-day residential program at the center of what Silver Hill does. The primary treatment modality we use is Dialectical Behavior Therapy (DBT). I am a formally trained DBT therapist with a background in transference-focused psychotherapy as well. I provide DBT and DBT-S (DBT for People with Substance Use Disorders) to people with diagnoses ranging from borderline personality disorder to bipolar disorder with co-occurring addiction. I also run the Cognitive Behavioral Therapy (CBT) programming at The Steward House at Silver Hill, which is.focused on the treatment of people who, in the course of managing significant executive or professional career responsibilities, have developed serious mental health or substance use problems.

How would you describe your impact?

People typically come to our Transitional Living Program in crisis, after a suicide attempt or with their lives totally broken, in chaos, and their relationships completely derailed due to their unmanaged illness. By the time they leave here, 28 days later, they’re usually entirely different people.

As a therapist, my role is to form a quick attachment with them so that they feel secure and anchored in me guiding their therapeutic treatment here. Our program is a brief intervention, which means that we need to get in there and make a difference as soon as we possibly can. You really need to make fast friends, so to speak, and you have to needle around right away. In outpatient psychodynamic forms of therapy, it can take years to get to some of the conversations that we’re having within a week. One of the benefits of doing DBT work is that you can actually make some very meaningful changes in a short period of time. It is different from some of the longer-term therapies, which are also wonderful, and which I work with in my private practice.

How did your Silver education prepare you for this position?

What was your favorite part of your Silver experience?

I had this intimate classroom experience, particularly at NYU Westchester. There were these small classes with maybe eight people, all of whom were really motivated and wanted to be there. And we had amazing professors! There’s a tremendous sense of community at the Westchester campus. It’s been a few years since I graduated and I’m still in touch with the friends that I made there, including people on the faculty. We’re always there for each other. I mean, I basically have a family.

Where were your field placements and did they impact what you’re doing now?

Definitely my Field placements had a tremendous impact!

My first placement was at Montefiore Schaffer Adult Day Program, which was just wonderful. I was trained by a woman named Pearl Hacker [who earned her MSW at NYU in 1988]. I was working with economically disadvantaged elderly people, most of whom had limited mobility, many of whom were cognitively impaired, had had strokes, or were severely schizophrenic. It was a Medicaid program, and unfortunately, towards the end of that Field placement, the hospital closed it down because it wasn’t deemed profitable enough. But that ended up being a tremendous learning experience for me. I facilitated the transition of all the patients to a new program, Wartburg's Adult Day Care in Mount Vernon. I was able to keep everyone together in their own room there. Originally they were all going to be sitting in different places. I know that all the things that I helped to set up for them would not have happened had I not been there. I advocated like crazy for them and I am really proud of the work I did there.

My Field Instructor and Practice professor were incredibly encouraging during that process. And going back to Practice class at NYU Silver and being able to actually cry in class and have the whole class cry with me was a whole new world. I had never experienced anything like that where we could freely be sensitive and where we could share these experiences together and actually learn from them In an intellectual sense as well as a personal, self-actualization sense.

And that was only my first placement. My second placement, at NewYork-Presbyterian’s (NYP) psychiatric hospital in White Plains, was phenomenal. I got to train under Dr. Otto Kernberg, the Director of the Personality Disorders Institute. It prepared me so much that when I got to Silver Hill, they were like, “Who are you, how do you know all this?”

At NYP, my primary location was on the Orthodox Jewish unit, where I provided individual and group therapy, and I also spent a lot of time on the personality disorders unit training and attending Dr. Kernberg’s case conferences. Dr. Kernberg, who is in his 90s now, is the person who created transference-focused psychotherapy. He largely outlined the base of what we know and understand about borderline personality disorders. He is a hero of mine, and the reason why I wanted to do my placement at NYP to begin with. At his case conferences, there would be a patient who would come and whoever was working with the patient, usually a medical school intern, would present the case. Then Dr Kernberg would interview the patient and then discuss everything that he thought about the patient afterwards. It would take hours and I went every week. I was just wonderful!

Is it true that Silver’s Office of Career & Professional Development helped you in your job search?

Yes, they were instrumental in teaching me how to go about looking for a job, and they helped tremendously with the phrasing of my resume. They helped me to hone in on what I should be highlighting and how I should present my experience. It was particularly helpful because social work was a new milieu for me. Previously I spent eight years in biological research.

Ultimately, I found my job through networking. Once I found out about the opportunity at Silver Hill, I asked everyone I knew if they knew anyone who worked there. A friend, who had a friend,  put me in touch with another friend, who gave me the name of a person who turned out to be the person who was hiring for the job I was applying for. I cold called them and that’s how I ended up here.

What do you love most about what you’re doing now?

I love working with people with personality disorders. Unfortunately, there’s a tremendous stigma against them, even among mental health professionals. I love that I can actually get in there and do meaningful work with this underserved population.