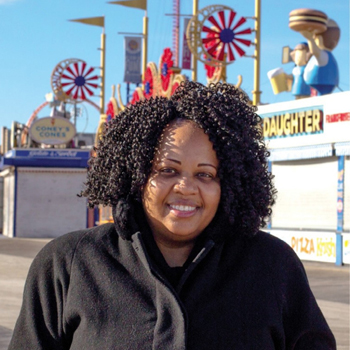 When she was sworn in on November 15, 2018 as the assemblywoman representing New York’s 46th District, it was her first elective office—but not her first time helping out the neighborhood where she grew up.

“My sisters and I were raised in a family invested in community service,” recalls Frontus, a daughter of Haitian immigrants who moved from Crown Heights to Coney Island when she was 7. “We spent every week at the local soup kitchen. Whether it was that or graffiti removal, we always found a way to get involved.”

When Frontus enrolled in the Silver School of Social Work at age 16—“it was my dream school,” she remembers—it quickly became clear that activism was her destiny. Frontus earned both a bachelor’s and a master’s degree in social work there. “It was confirmation for me that I was on the right path,” she says. (She went on to earn a master’s of theological studies from Harvard Divinity School as well as a master’s in psychology and a doctorate in social work from Columbia University.)

Always, when she saw problems at home, she sought solutions: in 2004, Frontus founded Urban Neighborhood Services, a grassroots agency; she also organized two coalitions to address gun violence and consulted locally on adolescent mental health issues. So it seemed a natural progression for her to run to represent the gerrymandered southern Brooklyn district. “This community has such a long history of being marginalized,” Frontus says. “I felt a personal sense of outrage—it deserved better.”

She also wants to change a stereotype. “There’s a story in America about people who grow up in struggling neighborhoods,” Frontus says. “Often the expectation is that kids will go away to college, get a good job, leave, and ‘do better.’ I always knew I didn’t want to leave, because I genuinely felt a sense of obligation. To me, it’s about leadership.”

This article originally appeared in the Spring 2019 NYU Alumni Magazine.