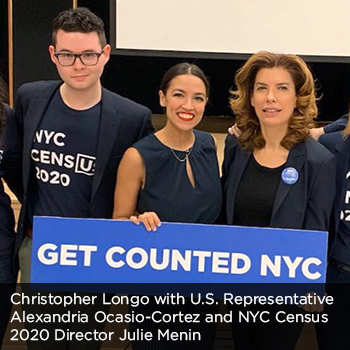 What does your role at DYCD entail?

My “city title” is Community Engagement Specialist at DYCD but functionally I am an aide to Amit Bagga, Deputy Director of NYC Census 2020. NYC Census 2020 is a Mayoral initiative and an independent office under DYCD.

In terms of time restraints, we’re effectively a campaign ‒ we’re very “all hands on deck all the time,” so the role entails a bit of everything. While my primary scope includes managing incoming meeting requests, conducting screening calls, gathering background and writing drafts, I also step into projects as needed. I was one of the logistics point people for our Grants team’s Mayoral event in January; I own the primary communications with CUNY ‒ the city’s primary partner for the census initiative; I coordinated logistics for our Citywide Partners, a group of some of the city’s most influential non-profits; and so forth.

How do you draw on your social work skills in your position?

Whether it’s navigating personalities when negotiating everyone’s availability for a last-minute meeting; spending hours with our Communications team looking over ad buys for cultural competency/humility; constantly looking for a holistic approach to our campaign initiatives; or managing up, down, and laterally; I consistently use the interpersonal, strengths-based, and policy skills we learned at Silver.

Were there particular classes, fieldwork, and/or other experiences at Silver that have been particularly influential in your work?

Both years of field work prepared me for this job. Coming into this program directly from suburban Connecticut,  my year counseling high school students at The Urban Assembly School for Collaborative Healthcare gave me a stronger insight into the daily lived experiences of New York City children, as well as direct exposure to the city’s immense wealth disparities. It also showed the lack of school funding New York  receives, which is directly tied to the census.

My second year placement at the Unitarian Universalist United Nations Office gave me a lot of experience with advocating. As an intern, members of the United Nations weren’t always keen on hearing every complaint about a lack of a holistic approach for equity, and having to advocate to sitting NGO Chairs was a daunting but critical learning experience.

Between co-leading/co-launching two student groups, as well as Dr. Linda Lausell Bryant’s Adaptive Leadership Fellowship and the work of the Silver Affinity Collective, I also garnered a significant amount of leadership experience at Silver that I’ve translated into this role.

Both study abroad trips that I took ‒ Scotland for international policy and Israel for treatment of children of substance-dependent parents ‒ were critical to my personal and professional development as well.

Also, the 12+ hour days at Silver prepared me really well for this job..

Which NYU Silver faculty have been most influential to you? Do you stay in touch with them?

Dr. Lausell Bryant was one of the most influential professors I had at Silver ‒ she’s adept at moving mountains for her students. She advocated for me to receive a macro second-year placement that I was pushing the school for; stepped into an advisory role for both my placement and for our launch of Macro Social Work Student Network; and the Adaptive Leadership Fellowship she and Marc Manashil led was critical to my leadership development.

Dr. Darcey Merritt was also a major influence on my second year at Silver. While I didn’t have Dr. Merritt for a class, her partnership (along with Dr. Lausell Bryant’s) with our student advocacy work was critical to its success and momentum, and her bold and brilliant approaches to an immensely challenging situation were, and remain, inspiring.

I exchange emails with both every few months, but do need to follow up more frequently!

Is there something you think all social work students and professionals should know about the Census that they might not be aware of? Or just some general information about social workers and the Census you would like to pass along?

The census is the largest social justice mobilization during peacetime. Our campaign is specifically targeting historically-undercounted populations in New York City to let them know that, yes, they count too. We’re also working hard to unpack the damaging rhetoric and mythology perpetuated by this administration through threats such as the failed attempt to place a citizenship question on the census.

In 2010, only 62% of New Yorkers responded -- and it cost us millions of dollars for education, infrastructure, and health care. The federal government projected an even worse response for 2020, anticipating only 55% of New Yorkers would respond to the census. A failure to complete the census will cost us Congressional representation as well as resources for the next decade. This means less money for the teachers and school social workers who are already spending their own money on classroom resources, and less money for doctors, nurses, and hospital social workers who are on the frontlines of this pandemic. They need you to show up for them, and your clients need you to show up for them.

The census takes 10 minutes, is only 10 questions, and impacts the next 10 years of our lives. Do it yourself and then tell your families, your friends, your coworkers, and your clients to do it too.

If for no other reason, do it because AOC & Cardi said so.